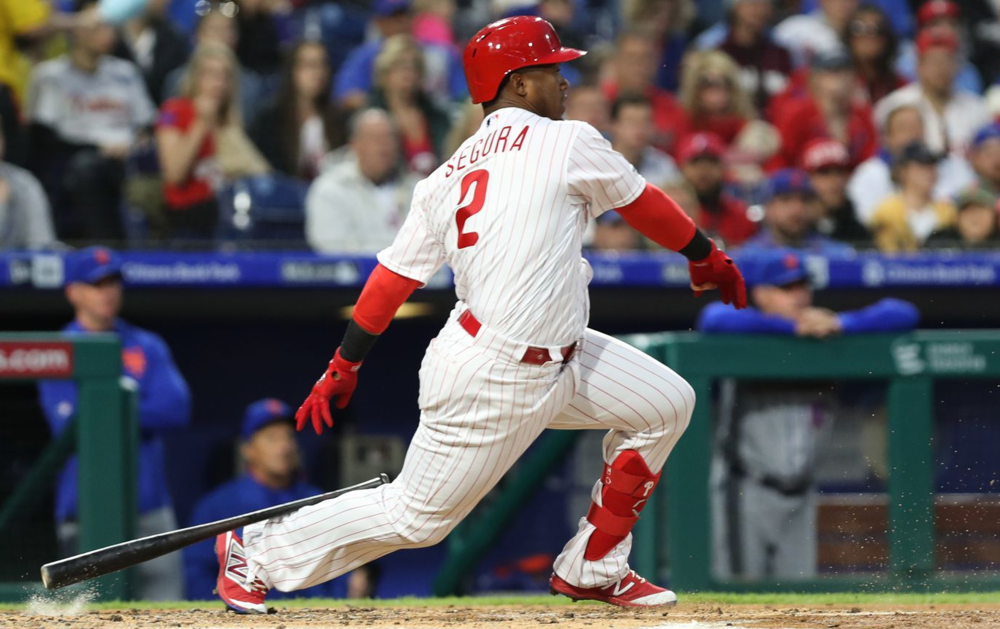 Is Jean Segura still a sure thing?
After two strong seasons with the Mariners, Segura's return to the Senior Circuit was a mild letdown, as he failed to bat .300 for the first time since 2015 while seeing his OPS and stolen bases decline for the third consecutive season. The 10 steals were particularly alarming for fantasy owners, as he'd averaged 28 over the previous six seasons and was expected to be a good source of speed. While the rest of his numbers were still solid, decreases in four of the five standard fantasy categories were disappointing after moving to a much friendlier hitting environment and better lineup. Segura is set to turn 30 in a couple of weeks, so it's possible he's not running as much as he used to, but his 2020 fantasy value will largely depend on how often new manager Joe Girardi gives him the green light. Fantistics Draft Advisor is projecting: .285BA/81RS/19HR/73RBI/14SB $8 EAV$

Have faith in Rhys Hoskins
After launching 34 homers with 96 RBI and an .850 OPS in his first full season in 2018, Hoskins was expected to deliver even bigger numbers in 2019. Instead, he regressed a bit as his average dropped 20 points and he fell short of 30 HR and 90 RBI despite playing 160 games and racking up 705 plate appearances. His average, slugging, and OPS have all gone down each year since he debuted in 2017 while his strikeout rate has crept up. On the plus side, his 46.2% hard-hit rate ranked 15th among qualified hitters last year, so he seemed to have some bad luck. His 14.3% HR/FB rate was the lowest of the top 35 hitters in hard-hit rate, while his .267 BABIP didn't scream good fortune. He showcased elite plate discipline by leading the National League with 116 walks as well, so there's a good chance his numbers improve in his age-27 season.

How will Didi Gregorius fare in Philly?
2019 was something of a lost season for Gregorius, who was sidelined until June by Tommy John surgery and appeared in just 82 games. Even so, he still packed a good deal of production into that half season, tallying 16 homers, 14 doubles, and 61 RBI. There were some troubling signs, however, as he faded badly down the stretch (.556 OPS over his last 25 games) and saw his plate discipline collapse, as his BB/K ratio went from 0.70 in 2018 to 0.32 in 2019. Now 30, Gregorius has to prove he can still be the hitter who averaged 24 homers, 81 RBI, and a .791 OPS from 2016-2018 with the Yankees. Moving to another home-run friendly ballpark and batting in a loaded lineup should help, so don't be afraid to reinvest in Sir Didi.

Cameron Maybin bound for regression
Maybin wasn't expected to produce much as a reserve outfielder for the Yankees last year, but injuries opened up playing time and he responded with the best offensive season of his career at age 32, slashing .285/.364/.494 with a career-high 11 homers in just 239 at-bats. He also showed his usual speed as well with nine steals, although he was caught six times. While Maybin will likely have more regular playing time on the talent-strapped Tigers and figures to lead off, don't expect similar production from Maybin, who clearly benefitted from a .362 BABIP last year despite striking out 26.8% of the time. Another year older and in a much less desirable situation, Maybin has regression written all over him.

C.J. Cron solid power option
Cron followed up on his 2018 breakout with another strong season at the dish, belting 25 of Minnesota's 307 home runs last year and knocking in a career-high 78 runs in only 458 at-bats. While his plate discipline remains an issue (career 4.1 K/BB ratio), he should see plenty of playing time and bat in the middle of Detroit's lineup, where he's expected to be their top slugger. He's only had one season with more than 500 plate appearances, and it was in 2018 when he drilled 30 homers. Cron, 30, doesn't offer much upside, but his floor is still pretty high and he won't kill you in batting average (.258 lifetime).

Can Jeimer Candelario get back on track?
Candelario appeared to be one of the Tigers' most promising players heading into 2019 after slugging 19 homers and working 66 walks in 2018 (his age-24 season), but injuries prevented him from getting untracked last year. He ended up appearing in just 94 games, finishing with eight homers and 32 RBIs for a team that badly needed power. His OPS fell nearly 70 points as well. His peripheral numbers largely stayed the same year-over-year, however, making him a possible rebound candidate for 2020. He won't cost much in drafts, and at 26 he's still squarely in his prime. If you're in an AL-only league and need a bat at the hot corner, Candelario may just surprise you.

Around the League
Giancarlo Stanton (NYY) - Stanton is dealing with a right calf strain that may cause him to miss Opening Day. The Yankees slugger suffered the strain Tuesday during outfield drills, and an MRI revealed a Grade 1 strain. Stanton said his chance to play in New York's March 26 opener at Baltimore depends on his progress over the coming days. After playing just 18 games last year due to injuries and known for being injury-prone throughout his career, Stanton seems like a good bet to miss additional time in his age-30 season. While the injury isn't serious and shouldn't linger, fantasy owners should be prepared for the possibility that Stanton may be unavailable for stretches of time this year.

Chris Sale (BOS) - Sale will begin the season on the injured list after reporting to Spring Training to pneumonia, which set him back from throwing several weeks and caused him to lose around 10 pounds. The wiry lefty is looking to build up his arm again and regain the weight, but Boston wants to be cautious with its ace, who is in the first year of a 5-year, $145M extension. Since leading the Majors in innings in 2017 -- his first season with Boston -- Sale has fallen shy of 160 innings in each of the past two seasons and may struggle to reach that benchmark again in his age-31 season.

Justin Verlander (HOU) - Verlander said he felt "really good" throwing live batting practice on Thursday after being scratched from his scheduled start for against the Nationals with groin discomfort. The Astros aren't taking any chances with the reigning AL Cy Young winner, who recently turned 37. Durability has rarely been an issue for Verlander throughout his career, as he just led the Majors in starts (34) and innings (223) last year. Accordingly, there is no need for fantasy owners to worry.

Kyle Freeland (COL) - Freeland exited his first spring start with back spasms. After allowing two runs over two innings, the lefty was warming up for the third when he unexpectedly exited. The Rockies hope this will be a relatively minor setback for Freeland, who is trying to recapture the form he displayed in 2018 (when he went 17-7 with a 2.85 ERA) after going 3-11 with a 6.73 ERA last year. It remains to be seen whether the 26-year-old will make his next scheduled start.

Emmanuel Clase (CLE) - The Indians received more bad injury news on Thursday, as the team announced that Clase is expected to miss 8-12 weeks with a moderate strain of the teres major muscles in his upper back - the same injury that caused Mike Clevinger to miss more than two months last season. Cleveland will have to wait to see what kind of return they will get on Clase, who they received from the Rangers in December's Corey Kluber trade. Now, don't be surprised if Clase doesn't make his Indians debut until midseason at the earliest.

Freddy Peralta (MIL) - Peralta inked a 5-year, $15.5 million, contract with the Brewers on Friday. The deal covers two years of club salary control and his three years of arbitration eligibility for the 23-year-old righty, who has gone 13-7 with a 4.79 ERA and a 1.30 WHIP over 55 career appearances (22 starts) in his first two MLB seasons. Peralta has shown a strong ability to miss bats with an 11.6 K/9 rate thus far, but he seemed inclined to take the security of a long-term deal after struggling mostly out of the bullpen last year (5.29 ERA). Peralta certainly has the stuff to succeed in the majors, but he needs to reduce last year's 1.6 HR/9 rate and keep working on his control career (4.2 BB/9 rate).

Stephen Piscotty (OAK) - On Friday, A's manager Bob Melvin said that Piscotty's MRI came back worse than originally anticipated. Piscotty, who has been dealing with a strain in his rib cage, may not be ready for Opening Day, although he hasn't been ruled out. Piscotty was limited to 93 games last year by knee and ankle injuries, watching his OPS dip more than 100 points compared to 2018. Even if Piscotty is ready for Opening Day, his lack of at-bats this spring may cause him to get off to a slow start.

Stephen Strasburg (WSH) - Strasburg took the loss in his first Spring Training appearance after allowing three runs on three hits and one walk with three strikeouts in 1 1/3 innings Friday vs. the Rays. Strasburg wasn't his sharpest despite recording three of his four outs as strikeouts, as he may still be feeling fatigued from last year's World Series run. In addition to leading the National League with 209 innings, Strasburg threw an additional 36 1/3 frames in the postseason. Never known for his durability, Strasburg may need awhile to ramp up in 2020.

Rafael Devers (BOS) - Devers, who spent half of last season batting in the middle of Boston's order before moving up to the two hole, is expected to hit second again this year, according to new manager Ron Roenicke. Devers slashed .334/.379/.653 with 19 homers and 63 RBI in 71 games batting second last year, establishing himself as a force at the top of the Red Sox lineup. While he won't get to hit behind Mookie Betts anymore, he's still in an enviable spot batting in front of J.D. Martinez and Xander Bogaerts.

Zack Greinke (HOU) - Greinke's late arrival to Spring Training was worth the wait, as he allowed just one hit and one unearned run over two innings in his spring debut Friday vs. the Marlins. He did not walk a batter and struck out three while throwing 22 of his 28 pitches for strikes. Roughly six of those were slides, which Greinke is looking to work on this year. An improved slider could make him even more lethal after he went 18-5 with a 2.93 ERA and a 0.98 WHIP last year.

Our Player Projections model was created and is maintained by our founder and lead Statistician Anthony Perri. Using advanced and cutting edge Sabermetric indicators, which now include velocity indicators on batted balls, our player projections are trusted for accuracy by several Major League Baseball front offices. Over the past 21 years, we have correctly forecast the statistical direction on over 7 out of 10 professional baseball players for their upcoming season. If you are ready to Dominate your Fantasy Baseball Draft, click here to register today. 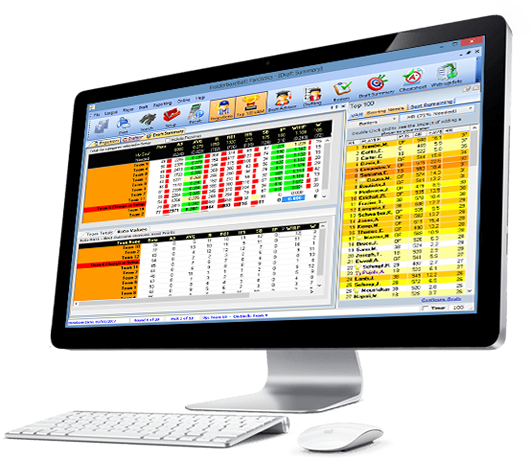 Tweets by Fantistics
Preseason Prep - February 28, 2020
InsiderMetrics: An Introduction to Strand Rate (LOB%) And Why It's A Leading Indicator for Pitching Projections