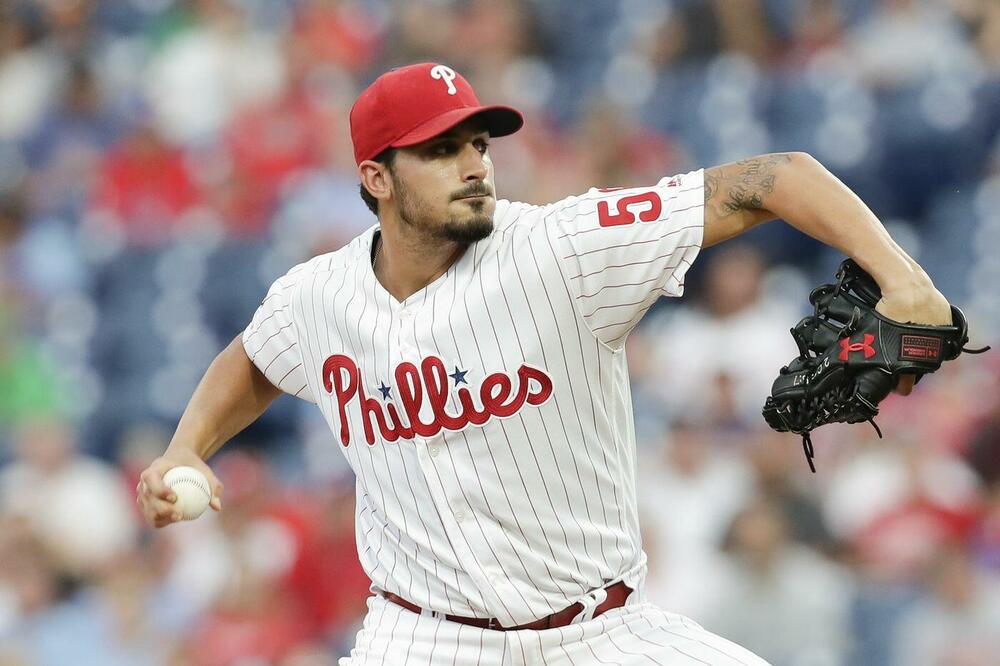 Philadelphia Phillies
Which Jean Segura Will the Phillies Get?
Segura was a different player offensively last year than he was in 2019, but then again that's kind of been the theme of his career. At various points he's been more of a light-hitting speedster, while in other years he's been a more well-rounded power threat. Last year was somewhere in the middle, as he batted .266/.347/.422 with seven homers in 54 games. While the average was nearly 20 points off his lifetime mark (not surprising given that his strikeout rate nearly doubled year-over-year), he compensated with more walks (career-best 10.6 BB%) and power (.156 ISO). Unfortunately for his fantasy owners, they didn't get much of the speed they were likely hoping for when they drafted him, as he successfully converted just two of his four stolen base attempts. He hasn't been running as much since joining the Phillies prior to 2019, so that doesn't seem to really be part of his game now he's in his 30s. That's fine as long as he continues to provide solid averages and pop, if there's one constant about Segura it's that you never know what you're gonna get.

Continue to Trust Zack Wheeler
The Phillies got what they paid for in the first year of their five-year, $118 million pact with Wheeler, who went 4-2 with a 2.92 ERA and a 1.17 WHIP in 11 starts last season. It was kind of a weird year for him, though, as his peripherals were all over the map. His strikeout rate cratered to 6.7 K/9, for instance - easily the lowest of his career. He posted the best walk and home run rates of his career, but also led the bigs in hit by pitches. I guess we can chalk some of that up to the craziness of 2020, as he's generally been a pretty consistent guy since coming up in 2013. He may be on the wrong side of 30 now, but don't let that deter you from drafting him as a mid-tier fantasy option.

Zach Eflin Trending Up
Eflin has continued to make strides over the past several years and took another big leap forward in 2020. In addition to going 4-2 with a 3.97 ERA, 1.27 WHIP, and 3.39 FIP (all career bests), he also racked up a 10.7 K/9 rate - easily the highest mark of his career and his first time fanning more than a batter per inning. He also improved his walk and home run rates slightly from 2019, demonstrating improvement across the board that suggests he's capable of another strong season in 2021 - his age-27 season. With three straight productive years under his belt now, he's a perfectly solid fantasy option in the majority of leagues.

Detroit Tigers
Which Spencer Turnbull Will Show Up?
Turnbull has had his share of ups and downs since debuting three years ago. After struggling in his cup of coffee in 2018, he struggled some more in 2019, leading MLB in losses (17) while recording just three wins in 30 starts. His 4.61 ERA was actually slightly above average on a league and park-adjusted basis (103 ERA+), however, and he struck out nearly a batter per inning, so it wasn't all bad. Last year, he continued to show signs of improvement, winning a career-best four (!) games while posting a 3.97 ERA and a 1.34 WHIP over 11 starts. He also did a good job keeping the ball in the park, yielding just two homers across 56 2/3 innings. So while Turnbull's 7-23 career record and 4.55 lifetime ERA may not seem impressive, his career 3.78 FIP is indicative of the kind of pitcher he can be when he's striking people out and limiting hard contact. If he can bring his ERA closer to his FIP this year, he may offer value as a sleeper pick towards the end of fantasy drafts.

Can Michael Fulmer Get Back on Track?
It's been a long fall from grace over the past few years for Fulmer, whose career has gone off the rails following his early success. After winning AL Rookie of the Year honors in 2016 and earning an All-Star nod the following year, Fulmer slumped to 3-12 with a 4.69 ERA in his third season before missing all of 2019 with Tommy John surgery. The time off seemed to take its toll, as he floundered through 10 starts last year to the tune of an 8.78 ERA and a 2.06 WHIP. Once a mainstay of Detroit's rotation, Fulmer will have to prove he's still capable of taking the ball every fifth day and pitching effectively. To do that, he needs to limit walks and hard contact, as he doesn't notch enough strikeouts (career 7.0 K/9 rate) to have much success otherwise. The .389 BABIP and 22.2 HR/FB % from last year both seem fluky and should regress closer to league averages, but it's concerning that batters teed off on him with an average exit velocity of 90.8 mph. No wonder he allowed so many homers (2.6 HR/9). His peripherals have been trending in the wrong direction the last few years, making him hard to trust anymore as he enters his age 28 season.

Around The League
Giancarlo Stanton (OF-NYY)
Stanton showed off his awe-inspiring power with a three-run homer on Wednesday against the Pirates, jacking his first Spring Training homer 420 feet with an exit velocity of 115.1 mph. Unfortunately for the Yankees, they haven't gotten to see that power as much as they would've liked when they traded for Stanton and his massive contract prior to the 2018 season. After swatting 59 homers in 2017 alone, Stanton has managed just 45 over the past three seasons combined, as injuries have limited him to just 41 games in 2019 and 2020 combined. While Stanton has always been injury prone, it's especially worrisome for a player in his early 30s. As always, Stanton will be a high-risk, incredibly high reward fantasy option this year.

Gleyber Torres (SS-NYY)
Torres followed up Giancarlo Stanton's monster blast with one of his own against the Pirates on Wednesday, crushing a Tyler Anderson pitch 429 feet to left field. That's a positive early sign from the 24-year-old, who's coming off a massively disappointing 2020 that saw his OPS fall nearly 150 points compared to 2019. Worse, his power was basically non-existent, as he managed just three homers and 16 RBIs in 42 games. On the plus side, he showed outstanding patience at the plate with a 22:28 BB/K ratio, so if he can team that with his previous power levels he'll be a force to be reckoned with.

Jorge Soler (OF-KC)
Soler homered for the second day in a row on Wednesday, belting a 417-foot moonshot in Kansas City's 9-3 win over the Reds. Soler's strong start to the spring is an encouraging sign for the 2019 AL home run champ, who slumped to .228 with eight home runs and 24 RBIs in 43 games last year. While Kansas City remains a tough place to hit one out, Soler is still in his prime at 29 and should be able to produce at least a 30-homer season if he stays healthy. He doesn't add much else from a fantasy perspective, but power with a decent batting average still plays in most formats.

Joey Votto (1B-CIN)
Votto was placed on the injured list on Wednesday after he tested positive for COVID-19 and will be out a minimum of 10 days, per MLB protocols. The hope is that there are no lingering health issues or long-term effects for the 37-year-old, who was in the midst of preparing for his 15th MLB season. While there's still enough time for Votto to return in time for Opening Day if he's able, the lost at-bats may produce some rust, so don't be surprised if he gets off to a slow start this year, especially given his recent downturn in production over the past several years.

Carlos Carrasco (SP-NYM)
Carrasco, who has been experiencing some soreness in his right elbow after throwing live batting practice, is expected to take a few days off to rest his throwing arm before resuming throwing to batters again next week. The Mets don't believe Carrasco's condition is too serious, as it's similar to other bouts of soreness that he's experienced throughout his career. The 33-year-old has been pretty durable throughout this career, so it seems like the Mets are just being cautious with their new hurler.

Forrest Whitley (SP-HOU)
The Astros announced on Wednesday that their top pitching prospect, Forrest Whitley, will undergo Tommy John surgery. The 23-year-old began experiencing discomfort in his right elbow while throwing live batting practice last week. The No. 41 overall prospect according to MLB Pipeline will miss all of 2021 and hopes to return in time for the 2022 season, when he'll look to make his MLB debut.

Max Fried (SP-ATL)
Making his spring debut on Wednesday against the Red Sox, Fried allowed one run over four innings in a 5-3 loss to Boston. Fried's spring debut was delayed five days due to quarantine protocols after he was potentially exposed to COVID-19 last week. The outing was certainly an encouraging sign for the 27-year-old, who picked up where he left off after going a perfect 7-0 last year with a 2.25 ERA in 11 starts for Atlanta.

Adam Ottavino (RP-BOS)
Ottavino made a strong case for himself as one of Boston's potential closers this year on Wednesday, striking out three of the four hitters he faced in a 5-3 win over the Braves. While Ottavino hasn't had much closing experience throughout his career (19 total saves), the lack of an established ninth-inning man on the Red Sox roster means Ottavino should be in the mix for opportunities along with Matt Barnes. While manager Alex Cora has said he plans to mix and match, it's easy to foresee Ottavino winning the job outright if he returns to form after a down 2020 based on his impressive track record. Ottavino may not be an exciting option, but he'll likely offer value for those who scoop him up in fantasy drafts.

Max Scherzer (SP-WSH)
Scherzer made his second start of Spring Training on Wednesday in a 3-2 win over the Cardinals, throwing 42 pitches across three hitless, scoreless innings. Scherzer, who fanned five, reached 95 on the radar gun and already appears to be in midseason form. The 36-year-old had a down year by his lofty standards in 2020, but he remains an elite fantasy option based on his incredible track record and consistency. Continue to draft him with confidence.

Jose Berrios (SP-MIN)
Berríos was firing the ball over the plate during Wednesday's 6-2 win over the Rays, averaging 95 mph with his heater and reaching 97 twice against the first batter he faced. That's a noticeable improvement from his averages of 94.5 mph last year and 93.1 mph in 2019. Already a two-time All-Star, Berrios could elevated his game even more in 2021 if he's able to maintain that kind of velocity for a whole season, especially coming off last year's career-best 9.7 K/9 rate.