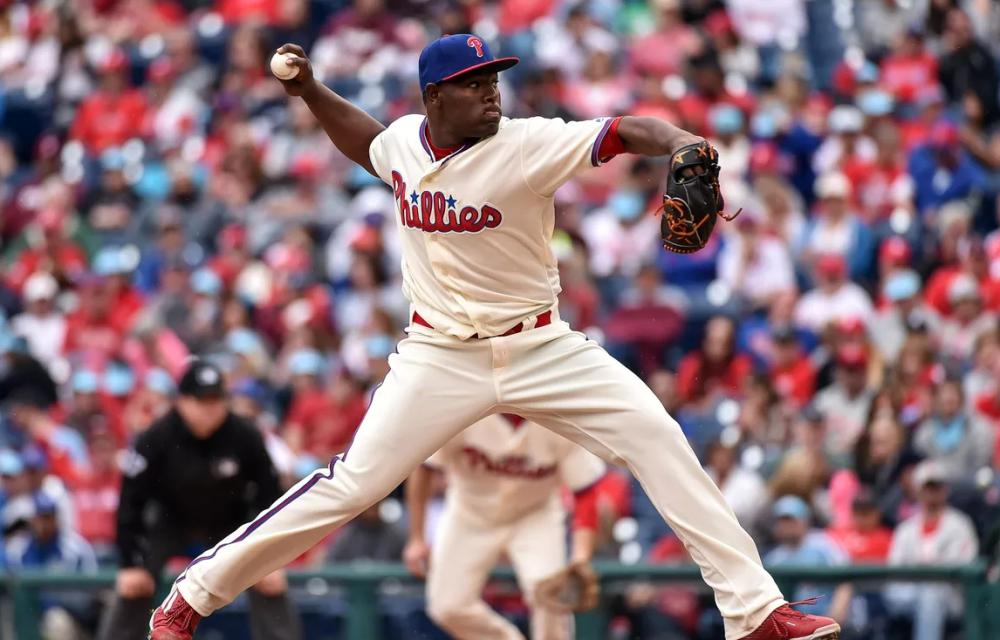 Philadelphia Phillies
Which Hector Neris Will Show Up?
Neris has been frustratingly inconsistent over the past several seasons, sandwiching a 2.93 ERA in 2019 between a 5.10 ERA in 2018 and a 4.57 ERA last year. Perhaps that's why he's never been viewed as one of the game's top closers, despite his strong career 11.4 K/9 rate. His 2020 campaign was especially perplexing, as he didn't allow any homers but saw his walk rate balloon to 5.4 BB/9 -- way higher than his career 3.1 BB/9 rate prior to 2020. That, combined with a terribly unlucky .381 BABIP and 59.5% strand rate, explains why his results didn't align with his glittering 2.50 FIP. It also didn't help that he got off to a rocky start, resulting in him being removed from the closer's role early on and finishing with a mere five saves. Neris should get more opportunities in 2021, however, especially after posting a 2.25 ERA over his final 16 appearances of 2020. All signs point to positive regression for Neris this year, which may allow him to top 30 saves for the first time if he's able so secure the closing job early on.

Will Vince Velasquez Ever Realize His Potential?
Velasquez continued to frustrate fantasy owners in 2020, teasing them with his elite strikeout potential (12.2 K/9) but ultimately struggling because of control issues (4.5 BB/9). That's been his story for awhile now, as he's gone 19-28 with a 4.99 ERA, a 4.60 FIP and a 1.41 WHIP over the past four seasons. There's no reason to expect any different in 2021, as Velasquez will turn 29 soon and has shown few signs of improvement. While his 2020 strikeout rate was a career-best, he also posted career worsts in walk rate, ERA (5.56), and WHIP (1.56). The promise of his early seasons has faded away, and it's hard to imagine him turning a corner so far along in his career. His strikeout rate alone makes him worth taking a flier on later in fantasy drafts, but owners should be prepared to have a short leash with him based on his spotty track record.

Can You Bank On Alec Bohm?
Bohm emerged as one of the better young players in baseball last year, slashing .338/.400/.481 in his 44-game MLB debut. The third overall pick of the 2018 draft, Bohm has already proven his talent is MLB-worthy. The question is; what can the 24-year-old NL Rookie of the Year do for an encore? While his average will likely come down a lot after being inflated by last year's .410 BABIP, he should still produce a strong average in the .280-.300 range based on his .305 average in the minors in 2019. He also has the potential to hit for a bit more power than he did last year, as he tagged 11 doubles but only four home runs. Look for him to put a few more balls in the seats this year, which should help offset some of his batting average regression. And while he only attempted two steals last year, look for him to be more aggressive on the bases this year now that he's had some time to get comfortable in the bigs. Bohm might not be a superstar yet, but he projects to be a very good MLB player. Draft with confidence.

Detroit Tigers
Keep Watching Willi Castro
The Tigers haven't had much success lately, but they may have lucked into a star in Castro. Acquired via a seemingly minor Trade Deadline deal with the Indians in 2018, Castro has blossomed into a promising young player with Detroit. After earning a cup of coffee in 2019 following his .301/.366/.467 performance in Triple-A, Castro showed what he could really do in 2020 by batting .349/.381/.550 with six home runs and 24 RBIs in just 36 games. He seems headed for regression in 2021 based on his unsustainable .448 BABIP and shaky plate discipline (13:72 BB/K ratio in the majors thus far), but there's definitely talent there. He also hasn't successfully stolen a base yet in the bigs, which should change very soon given that he routinely approached 20 thefts in the minors. He may not be able to sustain that level of power and run production over the course of a full season, but he still has good pop for a shortstop and could be a 15/15 or 20/20 type player who hits .270-.280. Soon to be 24, Castro will certainly be a player to draft and watch in his first full MLB season.

Don't Sleep On Victor Reyes
Reyes doesn't get much fanfare, but he's quietly been a useful fantasy outfielder over the past two seasons, slashing .293/.327/.414 with seven homers and 17 steals in 126 games. While his plate discipline (career 28:155 BB/K ratio) leaves a lot to be desired, and he hasn't shown much pop yet, his ability to hit for good averages and steal some bags gives him value in deeper mixed leagues and AL-only formats. After succeeding in his first season as an everyday player last year, Reyes has the potential to bat .280 with 15 homers and 20 steals over 162 games, which makes him roster-worthy in lots of formats. He's also 26, so it's possible he might even improve a little, especially given that he's accumulated just 690 MLB at-bats thus far.

Can Tarik Skubal Stick In The Rotation?
Skubal struggled to find his footing in the big leagues last year, going 1-4 with a 5.63 ERA over 32 innings in his first MLB season. His main issue was that he allowed too many homers, serving up nine of them in eight appearances (seven starts). On the plus side, he boasted a strong 37:11 K/BB ratio and finished with a 1.22 WHIP, suggesting that he'll have much more success this year if he can keep the ball in the park. The Tigers may not win many games for him, but there's potential for the 24-year-old to make strides in his sophomore season.

Around The League
Miguel Cabrera (DET-DH)
Cabrera is expected to start at first base on Opening Day rather than DH, where he played every game last year. The 37-year-old has spent the bulk of the last two seasons as Detroit's designated hitter, but he's looking forward to returning to the field after working on his conditioning and agility during the offseason. While he's still expected to be the team's primary DH again this year, perhaps playing the field every now and then will help enliven his bat, which has produced a .744 OPS over the past two seasons combined.

Mike Soroka (ATL-SP)
Soroka made his spring debut on Tuesday, throwing two innings against the Red Sox. It was Soroka's first game action since suffering a torn right Achilles last August. Prior to Tuesday, he'd been ramping up his workload via simulated games. Atlanta plans to open the season with him on the injured list as he continues to build up arm strength, but remains hopeful he can return to the rotation by the end of April.

Kyle Gibson (TEX-SP)
Gibson is set to make his first career Opening Day start when the Rangers square off against the Royals on Thursday. Gibson, 33, went just 2-5 with a 5.35 ERA in his first season with Texas last year, but he's hoping 2021 brings more success after developing a cutter during the offseason. For his career, Gibson is 69-74 with a 4.57 ERA and 1.42 WHIP, albeit with good success against Kansas City (9-5, 3.67 ERA).

Ji-Man Choi (TB-1B)
Choi will undergo arthroscopic surgery on his right knee Wednesday morning, Rays manager Kevin Cash announced Tuesday. He's expected to miss 3-5 weeks, although that timeframe is subject to change depending on what the doctors' evaluation during surgery. In Choi's absence, the Rays plan to use Yoshitomo Tsutsugo and Yandy Díaz at first base, likely in a platoon with Tsutsugo facing righties and Diaz facing lefties.

Todd Frazier (PIT-3B)
Days after opting out of his deal, Frazier returned to the Pirates on a Minor League deal, the team announced Tuesday. While the 35-year-old slugger will not be on the team's Opening Day roster, there's a chance he could find himself back in the big leagues very soon based on his .643 slugging percentage during Spring Training. Frazier will start the year at the Pirates' alternate training site in Pittsburgh, but based on the lack of talent at the big league level he'll likely be needed soon.

Drew Smyly (ATL-SP)
Smyly started Atlanta's final Spring Training game on Tuesday, allowing two unearned runs on six hits in 4 2/3 innings against the Red Sox with four strikeouts and no walks, capping a strong spring for the veteran southpaw. In four starts this spring, Smyly posted a 3.29 ERA in 13 2/3 innings with a 16:2 K/BB ratio. If Smyly can carry that performance into the season, he'll provide a nice return on the Braves' $11 million investment in him for this season.

Francisco Lindor (NYM-SS)
Lindor and the Mets did not reach an extension on Tuesday, making it increasingly unlikely that the two sides will be able to do so prior to the Opening Day deadline. Accordingly, it seems all but assured that Lindor, 27, will test free agency this winter, where he may very well command a contract north of $400 million depending on his 2021 performance. While the Mets would like him to stay in New York after trading for him this offseason, they'll need to pony up in order to retain their new star for the long term.

Dylan Cease (CHW-SP)
Cease ended Spring Training on a high note on Tuesday, racking up 11 strikeouts over 5 1/3 innings against the Rockies. Cease, who is on track to start the fourth game of the season against the Angels on Sunday in Anaheim, allowed one run on six hits with no walks, limiting the damage to a solo home run in the second inning. The no walks and 11 Ks were both impressive figures for Cease, who issued the most free passes in the AL last year (34) while averaging a pedestrian 6.8 K/9 rate. Heading into his third MLB season, improving both marks will be critical to having greater success on the mound.

Lucas Giolito (CHW-SP)
Giolito is planning to feature his slider more in 2021 after throwing it 14.7 percent of the time in both 2019 and 2020. While he's primarily a fastball pitcher, Giolito will replace some of those heaters (and changeups as well) with sliders as he tries to become more of a three-pitch pitcher, which should help keep hitters off-balance given that he hardly ever throws a curveball. Already a top pitcher, Giolito could see even more success in 2021 with this new approach.

Chris Rodriguez (LAA-SP)
The Angels announced on Tuesday that Rodriguez made their Opening Day roster. Anaheim's No. 4 prospect, per MLB Pipeline, will be doing a lot of learning on the job, as he's thrown a total of 77 2/3 innings in the Minors since being drafted in the 4th round in 2016. He also hasn't pitched above Class A Advanced. He saw his last game action in 2019 for the Inland Empire 66ers. Inexperience aside, the Angels were impressed by what they saw in Spring Training from Rodriguez, who racked up 10 strikeouts in seven innings alongside a 5.14 ERA. While he may need to be sent down during the season for additional seasoning, he'll open the year in the Angels bullpen.