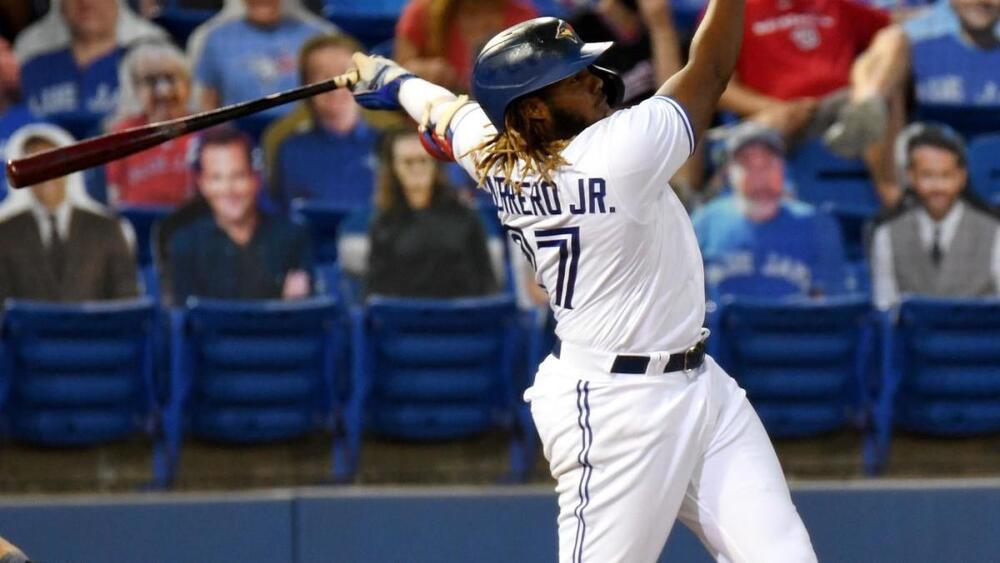 If you were picking a young hitter to build a team around, you'd be hard-pressed to do better than Guerrero. In a normal season, Guerrero would have easily walked away with AL MVP honors last year, but unfortunately for him Shohei Ohtani actually stayed healthy and produced the most incredible two-way season since Babe Ruth was still in Boston. Regardless, Guerrero's potential is seemingly limitless considering that he just turned 23 and is already perhaps the best hitter in the American League. Few players are capable of competing for a Triple Crown these days, but Guerrero is certainly in the conversation after batting a Miguel Cabrera-esque .311 with 48 home runs and 111 RBIs last year. With a devastating collection of hitters around him and a friendly home park, Guerrero is poised to do serious damage in 2022 and beyond, so much so that a 50-homer season is well within his reach. He won't get you much in the way of steals like his dad did, but his prodigious power and ability to hit for average make him an automatic first-rounder in fantasy drafts.

Harper heads into 2022 eyeing his third MVP award in his age-29 season. After a pair of productive seasons in Philly after signing his megadeal there, Harper really earned his salary in 2021 with an MVP-winning campaign, proving once again how high his ceiling his when he's able to stay healthy. At his best, Harper is capable of being the best hitter in baseball with elite power and plate discipline, as evidenced by last year's .429 OBP and MLB-leading .615 slugging percentage. He also hit over .300 and stole 13 bases in 16 tries, making him a true five-category contributor. With more talented hitters around him this year such as Kyle Schwarber and Nick Castellanos, Harper could be headed for an even bigger campaign in 2022, making him well worth a first-round pick in fantasy drafts.

Soto continued his trajectory towards becoming one of the best players in baseball last year, finishing runner-up in the NL MVP race to Bryce Harper despite having an arguably better season. Unfortunately for Soto, the Nationals were terrible last year and figure to be bad for a while, which means he'll likely continue to draw a heavy number of walks with few pitches to hit. Even so, that shouldn't be much of a problem for the 23-year-old, who has shown a historic level of patience for such a young player, often drawing comparisons to Ted Williams as a result. Incredibly, he has more career walks (373) than strikeouts (352) thus far, reflecting his elite batting eye. Throw in his power, .301 career batting average, and decent speed, and you've got yourself one of the first picks off the board in any 2022 fantasy baseball draft.

Is Trout losing his fantasy luster a bit? It's hard to ignore the injuries, which have prevented him from playing more than 140 games in a season since 2016. It's also hard to ignore his age, which is now on the wrong side of 30. But who are we kidding? When healthy, Trout is still clearly one of the best players in the game, as evidenced by his absurd stats over the past few years. He also has a decent lineup around him with Shohei Ohtani and Anthony Rendon, which can't hurt. While there's a sense that Trout is becoming the Christian McCaffrey of fantasy baseball, he's simply too good to avoid in the first round of a fantasy draft. Take him and hope he stays healthy, because if he does he just might win another MVP.

If you were building the ideal fantasy baseball player, you might end up with Turner. The guy can just as easily win you a batting title as he can lead the league in steals, plus he also has legit 20-homer power and plays premium positions up the middle. Oh, and did we mention that he also hits near the top of the lineup for one of the most stacked offenses in baseball? Sign us up! Yeah, Turner's pretty good. He seems to have been criminally underrated throughout his career, but he's still only 28 and is coming off his best offensive season yet. Turner's a no-brainer in the first round as one of the few legitimate five-category threats in fantasy baseball.

Correa will look to replicate his career year with the Minnesota Twins in 2022 after signing with them in the offseason. Correa's career has taken an odd path following his 2015 Rookie of the Year campaign, somewhat similar to Bryce Harper's. While the talent has always been there, injuries have often prevented him from suiting up or being at his best. For example, his 26 home runs in 2021 were a career-high, which seems shockingly low for a slugging shortstop who pounded 22 dingers in just 99 games as a rookie. Correa has only twice played more than 110 games in a season, earning unfavorable comparisons to Nomar Garciaparra and Troy Tulowitzki for his brittleness. While the speed he showed early on in his career has since evaporated, he still sports strong power and patience and is only 27 years old. With a solid lineup around him in Minnesota, he could do some damage, although Target Field is not as favorable to hitters as his previous home park in Houston. Assuming he's healthy, .280-25-100-100-0 is a potential stat line for him, making him a valuable fantasy asset at a thin position.

What's scarier than Aaron Judge? Aaron Judge in a walk year. Judge is about to turn 30 and enter his final season before free agency, so the timing feels ripe for another monster season for him. He finally stayed healthy last year after three straight injury-shortened seasons, falling just short of 40 homers and 100 RBIs while batting a career-best .287. Judge's ability to hit for high averages remains underrated, especially for a player of his size who strikes out a lot. The only area he can't really help you in is steals, but otherwise it's hard to find a better fantasy outfielder. If Judge is going to have another season like his epic 2017 Rookie of the Year campaign, this feels like it could be it.

After 12 seasons with the Atlanta Braves, Freeman is taking his talents to the West Coast with the star-studded Los Angeles Dodgers. At least he's leaving on a high note after winning an MVP in 2020 and a World Series in 2021. While it feels like the 32-year-old has already peaked, especially now that he's moving to a pitcher's park, he'll benefit from batting in the heart of an order that also includes Trea Turner, Mookie Betts, Cody Bellinger, and others. Freeman has the type of swing that plays anywhere, similar to former Dodgers first baseman Adrian Gonzalez. While we might not see 30 home runs or a .300 batting average from him again, Freeman should have another strong year across the board in 2022, making him one of the most desirable first sackers in fantasy.

Donaldson will continue the journeyman veteran phase of his career with the New York Yankees in 2022 after being traded to the Big Apple from the Minnesota Twins. Despite multiple changes of scenery over the past several years, Donaldson has continued to hit wherever he's gone. While the 36-year-old is no longer the elite defender at the hot corner that he once was, he's still a potent hitter based on his .247/.352/.475 slash line last year with 26 home runs. New York will be a big change for a guy who's never played in a big market before, but he should enjoy sharing a lineup with so many talented hitters. There's still 30-homer pop here if he stays healthy, which would be valuable at a thin position in fantasy.

Kiermaier continued to be a frustrating fantasy player in 2021, showing just enough power and speed to keep gamers interested, but not doing enough of anything else to warrant starting on a regular basis. Unfortunately, injuries and now age have often prevented him from achieving the 20/20 potential he hinted at previously in his career, reducing him to something of a poor man's B.J. Upton or Carl Crawford in Tampa Bay. There's still a bit of value to be had in AL-only leagues and deeper mixed leagues with five outfielders, but it's hard to recommend Kiermaier as anything more than a bench bat ahead of his age-32 season.

While no longer the hitting machine he once was, Miguel Cabrera is still a decent hitter at age 39 with several major milestones in his grasp. He already tagged his 500th home run last year, but is just three doubles shy of 600 and 13 hits short of 3,000. Cabrera is already a first-ballot Hall of Famer whenever he decides to retire, but reaching those lofty marks will further cement his status as one of the best hitters in MLB history, especially from the right side. While his fantasy value has waned over the past half-decade, Cabrera still collected 15 homers with 75 RBIs and a .256 batting average last year, proving he still has a little bit left in the tank. He won't do much to help your fantasy team these days, but he can still help out with counting stats in very deep leagues.