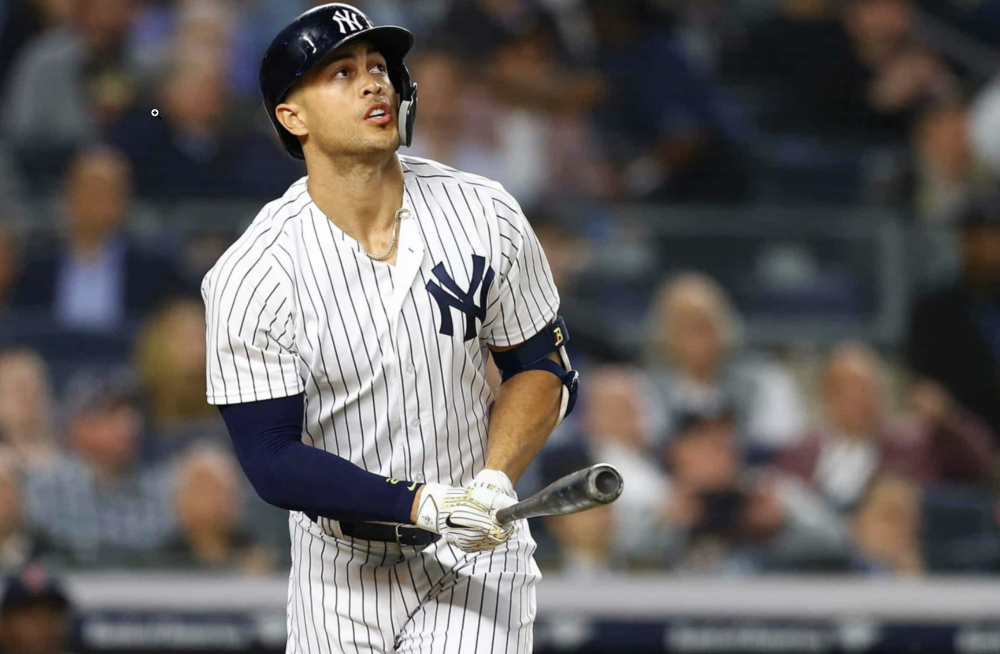 After missing most of 2019 and 2020 with injuries, Stanton bounced back in a major way in 2021 with 35 homers, 97 RBIs, and a .273/.354./.516 batting line. Stanton finally managed to stay healthy for the first time since 2018, playing in 139 games and producing his sixth career 30-homer season. It was a welcome sight for Yankee fans to see his name in the lineup almost everyday after injuries limited him to just 41 games total in 2019-20, costing Stanton a good chunk of his prime and perhaps a chance at Cooperstown someday. When healthy, Stanton teams with Aaron Judge to form the most physically intimidating 1-2 punch in any MLB lineup. He also proved that his skills haven't diminished too much in his early 30s, which is encouraging on the eve of his age-32 season. While he's no longer a factor on the bases with just one steal over his past three seasons combined, his .273 batting average last year was 28 points higher than the AL average, meaning that he's a true four-category fantasy performer and underrated all-around hitter. Health is always a risk with a player who's averaged just 110 games per season, but the risk is well worth the reward with the 2017 NL MVP.

After batting .307/.347/.549 across 75 games in his first two seasons, Bichette finally got the chance to show what he could do over a full season last year. The results were spectacular, as he led the American League with 191 hits in addition to batting .298/.343/.484 with 29 home runs, 102 RBIs, and 121 runs. He was also nearly perfect on the bases, stealing 25 bags in 26 attempts. Still just 24, he's certainly capable of replicating those monster all-around numbers again while batting near the top of Toronto's loaded lineup. While his value is a bit lower in OBP formats and points leagues due to his aggressive approach at the plate, his five-category contributions at a premium position (shortstop) make him a stud in roto leagues. There are only a handful of players with .300-30-100-100-30 potential, and this guy is one of them.

The Orioles are a terrible team, but they have a legitimate star on their hands in Mullins. Mullins excelled as Baltimore's leadoff man in his first full season last year, slashing .291/.360/.518 with 30 homers, 30 steals, and 91 runs in 159 games en route to an All-Star nod, Silver Slugger, and ninth-place MVP finish. While it may be difficult for the 27-year-old to replicate those numbers with such a weak supporting cast around him, it wasn't a total fluke either based on his solid 2020 performance before giving up switch-hitting. Accordingly, a 20/20 season with a .270 average and around 80 runs seems like a reasonable projection. He's not going to get many RBI chances batting first in a mediocre lineup, but his ability to contribute in other fantasy categories makes him a great option for your fantasy outfield.

Lowe is one of the top power options at the keystone -- or any position, for that matter -- after slamming 39 home runs with 99 RBIs and a .277 ISO. Lowe has quietly emerged as one of the best sluggers in baseball since debuting in 2018, increasing both his fly-ball rate and HR/FB ratio every season since then. The results have been impressive, as he fell just shy of the 40-homer and 100 runs/RBI benchmarks last season -- numbers he likely would have reached had he not missed 13 games. While his average dipped to .247, that was likely the result of his somewhat unfortunate .280 BABIP. With a .526 slugging percentage over the past three years combined, Lowe is no fluke and can be trusted as top second baseman in fantasy. This is a legitimate middle-of-the-order threat who should be good for 30-35 homers and a .250-.260 average, making him worth an early-round pick on draft day.

Abreu is coming off another outstanding season at the plate after batting .261/.351/.481 with 30 homers, 30 doubles, and 117 RBIs in 2021. While it was a slight drop-off from his MVP-winning campaign in 2020, it was still Abreu's fifth campaign in eight career seasons with at least 30 homers, 30 doubles, and 100 RBIs. While his .261 average was a career-low, he compensated with a career-high 61 walks -- 10 more than his previous high. Even at age 35, Abreu remains an incredibly dangerous hitter and is a good bet for another big season batting in the middle of Chicago's potent lineup, especially with six 100-RBI campaigns under his belt. He's also proven to be remarkably durable, missing just 13 games total across the past three seasons combined.

Ramirez continues to be an underrated superstar trapped on a mediocre Cleveland team. One of the best players in baseball, Ramirez is coming off his fourth top-six MVP finish in five seasons after clubbing 36 home runs with 103 RBIs, 111 runs, an .893 OPS, and 27 steals in 31 attempts. While he narrowly missed out on his second career 30/30 season, he still notched his third 20/20 campaign in as many full seasons. Unfortunately for Ramirez, Cleveland's front office doesn't seem interested in getting him any help whatsoever, thereby limiting his runs and RBIs somewhat. Even so, Ramirez is still a tremendous talent at age 29 and a premier option at the hot corner, making him a worthy first-round pick in fantasy drafts.

If you're looking for a relatively cheap power bat during fantasy drafts, Schoop could fit the bill. A reliable slugger, Schoop has mashed wherever he's played and has continued to hit well since joining the Tigers prior to 2020. He's hit .278 in both of his seasons in Detroit while clubbing 30 homers and 34 doubles in 200 games. Last season marked his fifth career 20-homer campaign, while his 84 RBIs were the second-most of his career despite having very little offensive talent around him. At age 30, Schoop won't give you anything on the bases and rarely walks, but he consistently hits the ball hard and is a solid run producer. He has more value in category leagues than points formats or OBP leagues, but his ability to play multiple positions gives him a boost in all formats.

Perhaps the biggest surprise of the 2021 MLB season was Perez leading the majors in both home runs (48) and RBIs (121), something he had never come close to accomplishing. While he's always been a good power hitter (especially for a backstop), Perez's previous highs were 27 and 80, respectively. As such, the question with Perez isn't whether he'll regress, but by how much? It could be by 50% or more in the power department, as 24 home runs and 60 RBIs are more in line with his career averages. He's also a catcher in his age-32 season, and backstops typically don't age well. All that said, Perez is an exceptionally durable catcher and a reliable power bat who typically hits for a solid average, making him a coveted option at a very thin fantasy position. Don't pay for (or expect) last year's results, but you can feel good about locking him into your lineup everyday.

Is this the year we finally get a true breakout campaign from Buxton? He's been teasing the fantasy community with his obvious talent and tools for years, but injuries and inconsistency have often prevented him from living up to he hype. He's played fewer than 100 games in six of his seven seasons thus far, including last year when he slashed a mouth-watering .306/.358/.647 with 19 homers and nine stolen bases in just 61 games. It wasn't a fluke, either, as he owns a .277/.321/.576 batting line over the past three seasons combined, albeit in just 187 games. Now 28, Buxton is still solidly in his prime and has proven he can play at an MVP level when healthy. Buxton is the ultimate high-risk, high-reward fantasy option, so make sure to have a backup plan if you end up taking a swing on him.

After a horrendous 2020, Altuve put his career back on the path to Cooperstown with another outstanding season in 2021. He equaled his career-high with 31 homers, proving once again what an underrated slugger he is and how much power he packs into his tiny frame. He also scored a personal-best 117 runs thanks to his presence in Houston's loaded lineup, driving in 83 more. His .278 average was one of the lower marks of his career, however, as he fanned a career-worst 91 times. He also managed only five steals, as he's no longer the dynamic baserunner that he was earlier in his career. Even so, the current version of Altuve who sacrifices a bit of contact and speed for power is still quite valuable, especially at the keystone for one of the best teams in baseball. He turns 32 this year, but don't let that dissuade you from drafting one of the best and most reliable hitters in baseball.

Haniger rarely gets talked about as one of the better outfielders in the American League, probably because he's spent most of his career on mediocre teams in Seattle. He also followed up his All-Star campaign in 2018 by appearing in just 63 games over the next two seasons combined, derailing his career for a bit. Well, Haniger returned with a vengeance last year, blasting a career-high 39 bombs and reaching the century mark in both runs and RBIs for the first time. His average dipped to .253 as his plate discipline regressed (54/169 BB/K ratio), but that could've been a function of some rust as well. Injuries have often prevented Haniger from realizing his true potential, but at age 31 he's still a force to be reckoned with. He won't do anything for you on the bases, but he can do plenty of damage whenever he's in the lineup.

Walsh was one of the breakout stars of 2021, although it wasn't much of a surprise based on his impressive (albeit abbreviated) rookie campaign the year before. After recording a sizzling .293/.324/.646 batting line with nine home runs and 26 RBIs in just 32 games in 2020, Walsh stepped into the everyday first baseman's role for Los Angeles after the team released Albert Pujols early in the season. That opened up regular playing time for Walsh, who proceeded to make his first All-Star team and bat .277/.340/.509 with 29 homers and 98 ribbies in 144 games. At age 28 and with a full season finally under his belt, Walsh could put up even better numbers this year if Mike Trout stays healthy and Anthony Rendon returns to form, especially if Shohei Ohtani puts together another MVP-worthy campaign.