Hi Folks, The first spring training sites have officially opened! Most importantly player news is starting to trickle in (down below). Before we get to it, lets visit a topic which is possibly related to the decline in offensive production:

Stadium Park Factors: Are new stadiums "pitcher friendly" and related to the decline of Offensive Production?

Since my article ‘Say hello to the Dominance of Pitching I, II”, I have received several comments regarding my linkage to the decade’s power outage to PEDs. One of the commenters asked how the new pitcher-friendly parks and the advent of the humidor in Coors factors in?

Another subscriber asked if I could use  ESPN’s Park factor as the milepost in determining if the new ballparks are indeed  pitcher friendly. Which would/could account for some if not all of the decline in hitting production that we saw in the last decade.

The impetus for using Runs Scored vs a statistic like homeruns, is to incorporate the other factors such as extra base hits and walks that turn into Runs. There is much debate on whether it’s a more effective indicator than any other stat, personally I would like to have a SLUG% indicator. Among other things I think it may be more reflective of the ballparks dimensions. Additionally the strength of a lineup can exaggerate the effects of a ballpark. Regardless, since PF has been popularized by ESPN and is widely accepted as a benchmark…let’s see if using PF shows us if the new ballparks are contributing to the offensive slowdown.

There is little doubt that Coors field has been tamed thanks to The Infamous Humidor’s soaking effect on baseballs (50% humidity at 70 degrees in essentially a meat locker under Coors Field). During the mega power years of 1999-2001, Coors field generated an Park Factor (Runs Scored) of 1.58. In other words, Coors field accounted for 58% more Runs than the average ballpark (not exactly as PF only takes the home team and does not consider visiting teams and their production in the ballpark). Regardless it's an incredible number (but let's remember that this lineup was stacked with the Blake Street Bombers during this time period, which likely (as mentioned) exaggerated the effect of Coors field during this period.  Moving on: Since the Humidor went into production at Coors (2002-2009), the Park Factor (Runs Scored) has dropped to 1.25. Roughly more than a 20% drop in production as measured by Park Factor. This average has dropped even lower the last 3 years (1.17).

The difference is significant for this ballpark, but how much does this account in overall production during these time periods? If we spread out the difference between Coors today (last 3 years) verses pre humidor (1999-2001) over all 30 MLB stadium teams we are looking at about a 1.4% reduction in Runs Scored over the decade of 2000. 1.4% is significant, but we need more help to account for the other 9+% drop in offensive numbers.

Lets take a look at all the ballparks that were faded out during the decade that was (00’s). Below is the park factor (Runs Scored Index) for the 3 years prior and including the ballpark's last season, the final column is the 3 year average. Again all of these ballparks were replaced during period 2000-2009.

The old ballparks, in their last 3 years of service (according to the Runs Scored index or Park Factor) were about 5% (.954) below the average stadium of that time period. Now on to the new ballparks:

Overall the new stadiums seem about 2.5% (.975) below the mean or average stadium in Runs Scored. However, even though they are below the mean,  this suggests that the new MLB stadiums built during the last decade are slightly more hitter friendly than the old (.95 verses .97).

Without employing complex mathematics we can surmise that the +2% difference in the relative Park Factor of the new stadiums, offsets the -1.4% reduction of the Coor's humidor effect. An almost even wash.  Hence, based on the data presented above using the popular Park Factor, we can not find any correlation between the drop in hitter production during the last decade and the new stadiums/Humidor effect.

Regardless of the culprit (PEDs or otherwise), as we alluded to in the last 2 articles (hitters/pitchers)....pitchers are regaining their once held dominance. Which brings on a fantasy paradigm: pitchers are becoming more predictable to forecast (therefore shouldn't be discounted as in the past), posting better stats, but at the same time there are more good pitchers available. This spring we'll discuss some strategies to capitalize on the trend, a logic I might add that is already calculated in the Fantasy Player Projections Software (plug).

BallPark Factor in the software

The Ballpark factor that we utilize in the player projections software (under Forecaster - 2010 Support - see below) is a combination of Runs Scored and Home Runs. Although I mentioned that Slugging % might be the best indicator of them all, that data is not easily attainable. Therefore I find that the 2 indicators together offer less noise (and yet are highly correlated).

Hitters playing in a hitter friendly stadium will have a factor above 100 and pitchers in the same ballpark will have an inverse ballpark factor. As an example, Curtis Granderson's new confines (Yankee Stadium) has a Runs/HR factor of 107 (7% above the average stadium), while teammate CC Sabathia has a Ballpark factor of 93. Simply meaning: based on 1 year of data, he's playing in a more hitter friendly stadium....of course things could change when we get more season data in the books.

The good news today is that pitchers and catchers are starting to report to spring training sites in Florida and Arizona. I hope that brings some warmth to your part of the world.

Players in the News:

An MRI on Atlanta Braves pitcher Jair Jurrjens' right shoulder has revealed inflammation but no structural problems. Jurrjens has baffled me since his callup into the majors. Last season his BA against (.235) was the best it's been since his rookie season in the minors. A chuck of it came from a favorable BHIP% (22 points in BA), XERA is 52 points higher than actual, LOB% is .81 which frankly is unsustainable for a .71 K/I pitcher. Yet he was consistent, pitching 25 Quality Starts in '09. We are impressed, but the indicators say he is a high risk to repeat. We were projecting a decline in performance before the shoulder inflammation, now he's on our injury watch.

Joel Zumaya is feeling great after his off season shoulder surgery. Zumaya is definitely worth talking up during your draft, for those hoping to get Jose Valverde on the cheap. Despite rumors of his demise, Pappa Grande is still one of the top closers in baseball. Consider that over the last 3 years there have only been 7 closers that have been worth more than $20 (Roto 5x5) in each of these years...Valverde is one of them.

Kelvin Escobar complains of shoulder discount on first day of camp. The Mets fan in me (condolences acknowledged) had visions of Kelvin returning to his 2007 form and slipping into the Mets #3 or 4 rotation slot. Glad he didn't wait to make me look foolish.

Washington Gm Mike Rizzo expects that Ivan Rodriguez will play in as many as 90 games. Why the Nationals decided to limit the growth potential of Jesus Flores is beyond me...but so are many of their free agent moves. In limited action last year (see stress fracture shoulder), Flores was over .500 in slugging% with ISO of 20.1%. Which of course is not sustainable (ISO-20) over a full season, but do consider his solid 14% ISO in 300 ABs in 2008.

Felipe Lopez says that the Cardinals are one of the 4 teams pursuing him. Signing in St. Louis would significantly increase his value, especially his Run Scored potential (Think Lopez ahead of Pujols/Holliday). In STL,  95-100 would be a attainable number if he's anywhere close to his '09 .383 OBP (.350 is more likely for '10)

Brad Lidge is a few weeks behind schedule after knee/elbow surgery, but says he's healthy. At this point, there is a strong possibility that it will be Ryan Madson opening the season as the Phils Closer. Madson dominated Right Handed batters last year with a 1.04 WHIP, yet Left Handed batters labeled him with a 1.46 WHIP. Clearly there is some weakness in Madson's game, enough that Lidge could/should slide back in once the season gets underway.

Mike Lowell designated himself as a bench player? The Red Sox think so and so does his thumb and hip. Lowell's surgically repaired thumb is still not fully healed, and his balky hip is improved but not perfect. In fact he told reporters that his hip is 10% better...not really encouraging to hear from a 36 year old. We're dropping 20% of our projected ABs, as we thought there would be a possibility that Lowell would get traded before the season. That doesn't look like it might happen now. 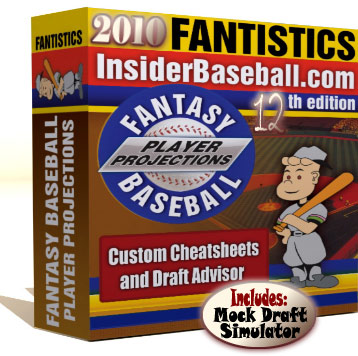