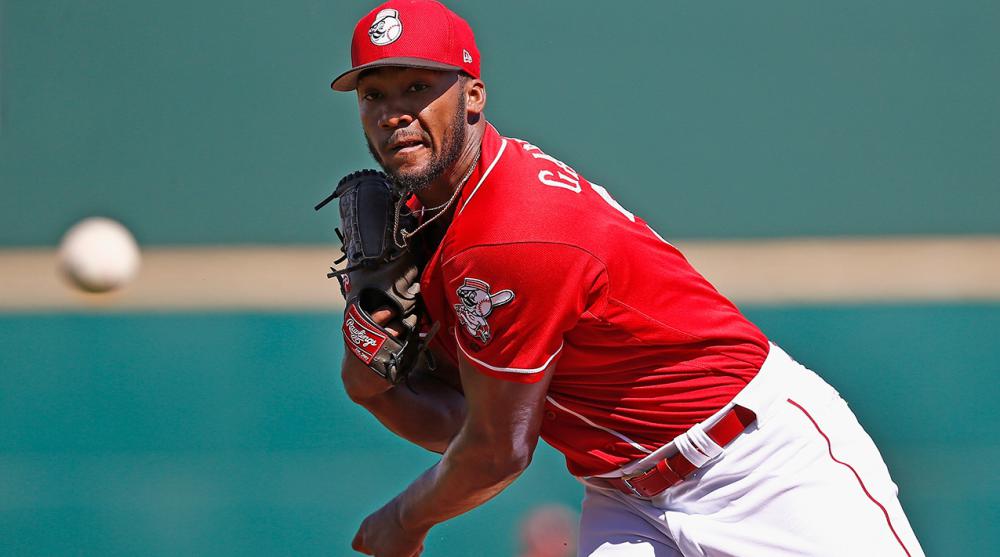 Welcome to the first Prospect Central of the year! Each week we profile prospects that are expected to have an impact on the fantasy landscape with industry leading depth and insight:

Amir Garrett's MLB debut on Friday was a successful one as he shutout the Cardinals for 6 innings on 2 hits and 2 walks with 4 Ks. The 24-year-old lefty earned a slot in the Reds' depleted rotation with a good spring following a 2.55 ERA with 132 Ks over two levels (AA and AAA) last summer. In the middle of last summer I said that "It's time to put Amir Garrett on your fantasy radar, if he's not already. The 6-5/210 left-hander is rifling through AA this year in his first 8 starts, posting a 1.51 ERA, 1.09 WHIP, and a 24.2% K rate. Given the level of pitching opportunity in the Queen City, it may be good to keep an eye on Amir as we go through the summer ... There's a decent bet that 12 months from now Amir will be with the Reds, even accounting for his inexperience. I think he has a lot of work to do but I also think he can pull it together quickly."

Amir is a former college basketball player (St Johns) and he brings that athleticism (in a 6-5/210 package), competitiveness and coachability to the mound with him. One of the reasons that I thought he had a chance to position himself so quickly to take advantage of opportunities at the Reds' MLB level was that he's very adept at taking instruction theory and putting it into practice physically. He absorbs mechanical adjustment very quickly and it shows, he is already pretty sound mechanically for his age and experience despite a lot of remodeling.

He threw FB (64%), slider (18%) and change (18%) in his debut. His slider and change have come leaps and bound in the last 12+ months and those deployment numbers tell you how well he's brought them along. His FB velo (91.2) isn't ideal but the deltas on his secondary stuff (Slider about -12 on Friday and his change about -10) makes that fastball play up.

His quick and effective development is incomplete however. As far as he's come, Amir has yet to achieve the solid repeatability that is going to add (hopefully) control and eventually command to his game. His minor league walk rates have been problematic for a pitcher who puts a lot of balls in play with his low-90s velo. The development of his slider and change have been great and the deltas will make his FB better but none of it is particularly impressive until Amir can go into the zone protected by both his change of speeds and his ability to locate.

He's young and he's improving and it feels like all of this will come together in short order but that's the battle front for Amir between him potentially becoming a poor man's #2 (poor team's #2?) and a back half of the rotation starter. He needs to nail down his mechanics, which should bring control and command, which should make his change of speeds play up, which should pump his K rats a bit, which should make him a good NL starter. If I am placing my bets now, I see him becoming a #3/#4 borderline with a hair higher K rate than you'd expect from that slot. And I wouldn't be surprised if we are there 12 months from now

It doesn't happen very often that I find myself in Week #1 of Prospect Central writing about a player I have never written about before. If my first few PCs of the year I usually concentrate on players that came North with the big club as we try to figure out what they might produce in the next 6 months. Usually you see these players coming and usually I have written them up before.

Entering calendar 2016 however, JaCoby Jones was coming off a disappointing AFL stint that ended his debut pro tour with the Pirates and he on the road to a 50-game PEDs suspension. He came to the Tigers organization and posted a less-than-distinguished, two-level summer last year before finishing up with a short look at the show. All was quiet this winter and manager Brad Ausmus said in January that Jones probably needed more time to develop after including him in a laundry list of mediocre options competing for the ABs in CF. Then JaCoby ripped off a .327/.377/.510 spring training last month that included a pair of homers and three steals. That was good enough to land him a piece of the CF job to open the season, along with Austin Romine.

Jacoby is a work in progress and I think he's progressing more towards a utility role than everyday ABs in the majors. He is an OF at the moment but he can handle some starts at 3B and an emergency appearance at SS as well. He's not particularly adept anywhere defensively, and that calls into question his ability to collect MLB ABs with position versatility, but I am not yet ready to call that plan dead.

What he does possess is pretty good physical power and close-to-excellent speed. If he could refine his clunky, inconsistent swing and develop a plate approach (any plate approach) and create more contact, he has the physical skills to post a string of 15/15 seasons, and maybe a little better on occasion. Whether he can do any of that at the MLB-level is an open question.

For now though he has opportunity, even if he doesn't yet have the ability to make contact at a reasonable rate. He also has an athletic build and raw physical skills that make him tantalizing. I think we'll know a lot 150 more ABs from now but JaCoby looks too raw for me to get excited at this point. He can develop quickly and players do have light switch months, so JaCoby may have something left to show me, but I am afraid that I am going to have to ask him to show me.

Jones has the ceiling of an everyday OF with a low-grade power/speed combo (and a scary contact rate), but if I am placing my bet today, I see more of a 4th/5th/platoon/OF/UT player.

Click on the following link for the rest of the Prospect Central Report in the member area, were we profile another 3 prospects and include the complete trankings on the top fantasy prospects and their expected callup: http://www.fantistics.com/baseball00/M-Prospect.htm.

Weekly Lineup Ranking: your fantasy players are rated/ranked based on the strength of the opposition for the coming week.

Strategy Player Reports: find out who the Rising, Dropping, Hot, Cold, and Recommended players are. 14 Day Pitching Rotations: We take great pride in the accuracy of our 14 day rotations which are updated daily in our member section.