Lets face it, it's a dilemma that many Fantasy GMs face on draft day: How valuable is speed in relation to power. Let's start by examining how Rotisserie values a Stolen Base verses a Home Run:

If you play in a typical rotisserie league (non fantasy point) then for most of you, the Stolen Base category has the same weight as the Home Run Category. If you play in a 5x5, then each of these categories is worth 1/10 of your total points. Last season, the average number of SBs among the top 168 MLB hitters (12 teams 14 starters) was 11.5, the average number of HRs among that group was 17.1.  In the industry's FSTA Expert League last year, the top 3 teams averaged 183 SBs, while the top 3 teams in the HR category averaged 272. Simple Math tell us that a Stolen base is more rare than a HR  (by 33%: 11.5 vs 17.1), therefore each occurrence is more valuable on the surface....however the net benefit is much smaller than the figure quoted and is often overvalued (please read on).

For illustration purposes, below is a listing of the top 20 SB leaders from 2011. At the bottom is both a mean for the top 20 in each category, as well the mean among the top 168 fantasy hitters (12 team league, 14 starters). 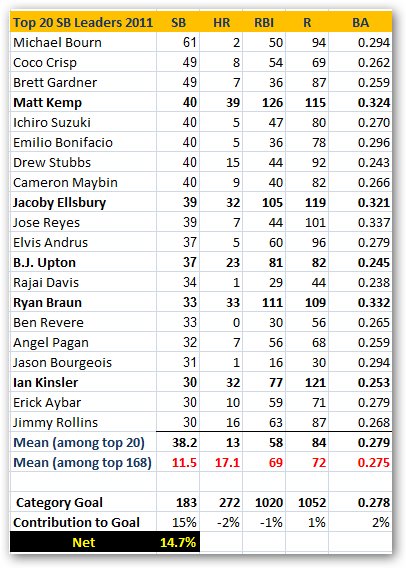 The last 3 rows above shows: 1. The category goal: average top 3 finish in the aforementioned league, 2. The net delta contribution to each 5x5 category, above the average starting fantasy player, and 3. On average the top 20 SB guys from 2011 contributed 14.7% more than the average player towards their GM's fantasy goal. Basically these top 20 SB guys were pretty close to average in most categories other than stolen base....their main contribution was as expected (their speed).

Now here's where I change directions and explain why the advantage for the SB category can be misleading:

A Home run contributes directly and immediately to more categories than it's own, including the Runs, RBIs, and the BA categories. Unlike the SB category, each homerun immediately registers a tally in 3 other categories. As was evidenced last season among the top 20 HR hitters, their impact was just as evident despite having the numerical disadvantage we touched on above. 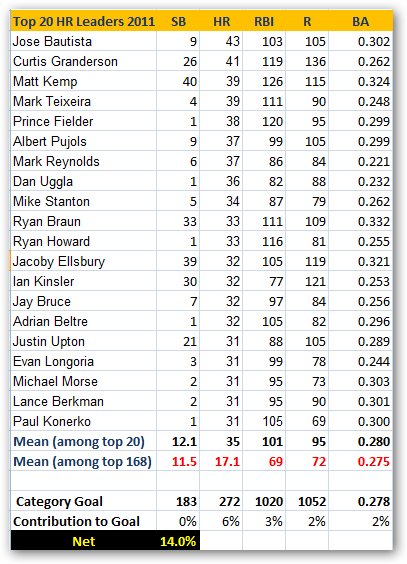 The net effect of 14% is very close to the net effect of the top SB leaders (14.7), hence what looked like a big advantage for speed, was not so much evident in the big picture last season.

To take it one step further, if we exclude the power hitters from the top 20 SB group (those in bold) we start to see the weakness in chasing steals in the early to mid rounds on draft day. Without these multi talented players, the top 20 SB group significantly suffers in their contribution to the other categories...namely HR (6.5) and RBI (44). These category deficits can significantly weigh down their inherent advantage.

In conclusion, stolen bases are slightly more valuable than HRs, but choose wisely as the pitfalls can quickly outweigh the scarcity factor. Here are a few thoughts/observations for draft day:

1. 5 Category fantasy players are insanely valuable. Last season players like Matt Kemp, Jacoby Ellsbury, Ryan Braun, and Ian Kinsler were absolute beasts in their fantasy contribution. Paying for steals here (sans Braun) is well worth the cost as their contribution in the stolen base department can account for a 5th of your SB goal,  while also exceeding their peers in the other categories.

2. Take a balanced approach, don't over pay for the top SB guys that can't contribute in other categories. Chasing a Nyjer Morgan in the 12th round is on par with chasing a power hitter (eg. Alfonso Soriano) who is going to hurt you in the Batting Average and Runs categories.

3. Do take on 20+ SB guys at the scarce positions. If you don't get a stud shortstop or second baseman then take the discount offered in the later rounds for the likes of Jamal Weeks, Alcides Escobar, Ian Desmond. The power at these positions will be gone early, so if you've got an open slot, there is a very good ROI on these types of middle infielders in the later rounds.

4. If you don't fill your draft SB quota/goal, don't panic! Steals are much easier to acquire on the waiver wire than power numbers. Consider the likes of Jamal Weeks, Dee Gordon, Emilo Bonifacio, and Ben Revere were not drafted in most leagues last season.

As always consider the tools inside your Fantistics Draft Advisor software. The software calculates the value of each category and applies your specific scoring rules to produce the optimal Dollar Values/Draft rank...and our Goals section in the setup area and Draft Summary allows you monitor your progress during the draft.

That's it for today folks, we'll be back soon with our daily preseason player notes. Have a great weekend!

Anthony A. Perri  Statistician and Publisher