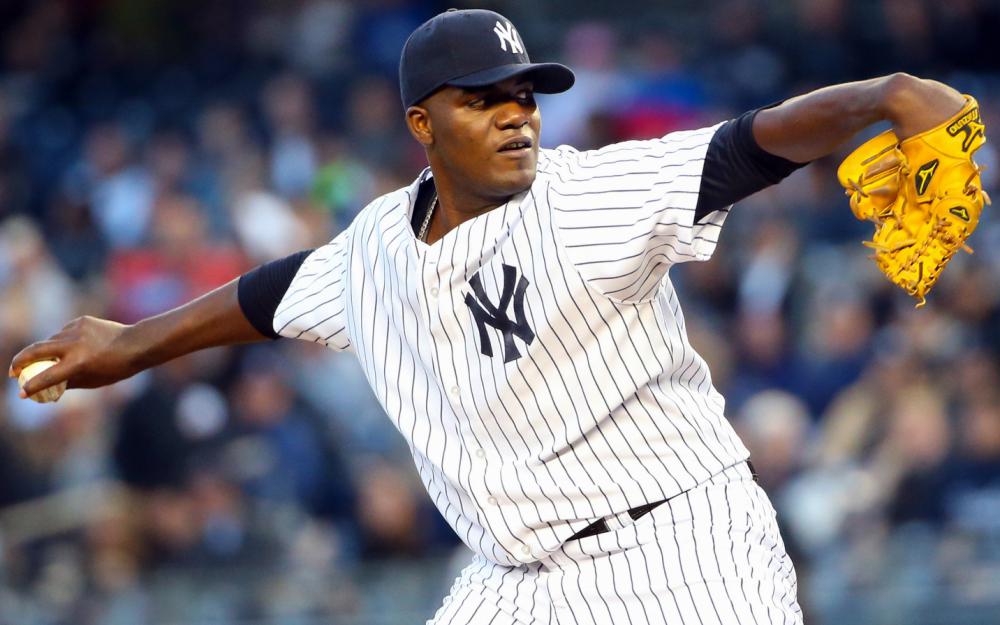 Things are starting to sort themselves out. Right now, the Opening Day rotation projects as above. Hill has walked a surprising 10 batters in 8.2 innings, but we're not worried just yet. Check out his next start to see whether he's made progress before you start to worry. Ryu tossed three innings of one-run ball against the Cubs and a bunch of no-names Thursday, but he has allowed just one run in five innings with six strikeouts this spring and appears set to be in the rotation. McCarthy has had an up-and-down spring, but he should be ahead of Scott Kazmir and Alex Wood in the pecking order. Julio Urias? At this point it seems likely that Urias will open in Triple-A to manage his workload before bringing him back up for good. The situation remains fluid, so continue to monitor this one closely.

Brett Eibner (.294/.385/.559 this spring) may be making a push, perhaps forcing a trade of a guy like Ethier or Van Slyke, but the majority of the at-bats (at least versus RHP) should go to the Toles/Pederson/Puig trio. Ethier has had just nine at-bats (four hits) this spring as he's been brought along slowly, while Puig is batting just .214, but has four walks and five of his six hits have gone for extra bases. Toles could be a nice source of batting average and steals, as it's intriguing to wonder what he can do with 500+ at-bats.

The Denver Post is now favoring Holland over Ottavino after Holland hit 95 mph with his fastball and showed good bite on his breaking stuff in Wednesday's perfect outing. We'll have to wait and see to ensure Holland stays healthy and productive these last two weeks, but it is growing more and more likely that he gets the closer gig. Hollland was one of baseball's top relievers from 2011-2015 and has a pair of 46+ saves seasons on his resume, so if he's healthy, he likely gets the gig and runs with it.

Hoffman hasn't been overly impressive this spring, but his former top prospect status seems to have him locked into a spot, due in no small part to a lack of competition and the unfortunate Chad Bettis cancer diagnosis. At the No. 5 spot, German Marquez and his awful spring (8.00 EA, 1.78 WHIP) appear to be atop that depth chart, though don't rule out the intriguing Antonio Senzatela (2.38 EA, 0.88 WHIP, 10:0 K:BB in 11.1 spring innings). Senzatela however has pitched just 34.2 innings above A-ball, so the 22-year-old may be ticketed for the minors no matter how he does. Stay tuned though, as this isn't over.

Both Parker (.313/.450/.635) and Williamson (.324/.378/.559) are hitting well this spring, so this continues to look like a platoon, with Parker getting the better end of that one. The opportunity is still there for one guy to win the job outright, but the Giants seem likely to carry both guys out of camp. The advantage Parker has here is that he's out of minor league options, while Williamson can be sent to Triple-A for further seasoning.

This is a situation where it may not matter how awful Cain's spring numbers end up being, but if he's healthy, he's the heavy favorite for the job given his status and salary. Cain has a 9.58 ERA this spring in 10.1 innings, including allowing batters to hit .356 against him while Cain has fanned just five and walked three. Blach (5.56 ERA) has been knocked around a bit himself while Beede has allowed just one run in 7.1 innings, but sports an unimpressive 4:4 K:BB. Suarez (6.14 ERA) is a huge long shot. Ultimately I think Cain gets this gig but Beede makes more MLB starts. Edit: Cain allowed three runs on NINE hits over 4.2 innings Friday, though he did post a 5:0 K:BB. This one appears far from decided.

Michael Pineda (SP-NYY) - Given his injury history, I'm probably going to regret this, but I'm getting excited about Pineda yet again. The free-agent-to-be has had a solid spring, allowing just two runs on four hits over 10 innings with an elite 14:0 K:BB. Pineda has yet to reach 176 innings in a season, but he's managed to stay healthy enough to post 59 starts over the past two seasons, topping 200 K's for the first time last year. He's improved his fastball velocity in each of the past two seasons, allowing him to post an ace-like 10.6 K/9 in 2016. It would be nice to see him go more than 5.2 innings in a start with greater frequency, but a hard-thrower coming off 207 K's who looks great this spring and is likely being drafted in the 30-35 range for starting pitchers? Sign me up.

Masahiro Tanaka (SP-NYY) - Tanaka threw the first 4.1 innings of a combined no-hitter against the Tigers on Friday, striking out six and walking two. Tanaka has the looking of a Cy Young contender so far this camp, tossing 13.1 innings of three-hit scoreless ball that includes a 19:2 K:BB and .071 opponents' batting average. Tanaka saw his K/9 dip to a career-low 7.4 last year, but he seems likely to improve that mark in 2017 and should be in line for his first 200-inning season after missing the mark by one out in 2016. His elbow issues appear to be a thing of the past.

Adam Wainwright (SP-STL) - Well I'm feeling slightly less confident about endorsing Wainwright after seeing Friday's Cardinals-Mets box score. Wainwright ended up allowing a whopping 10 earned runs on seven hits over 1.2 innings with four walks and no strikeouts. Apparently this was a real game and not batting practice. Luke Weaver relived Wainwright and allowed four runs of his own in 1.1 innings. Wainwright entered the game having allowed a 3.00 EA in nine innings, so this sort of came out of nowhere. It's possible we'll read late that he was trying some new pitches or just throwing fastballs, but either way, let's just hope he's not hurt.

Jake Bauers (OF-TB) - Here's a 21-year-old prospect to keep an eye on. Bauers launched a home run in his only at-bat on Friday and it was his third long ball of the year, lifting his slash line to .435/.533/.913 with an eye-popping (no these numbers aren't reversed) 1:6 K:BB. Bauers has yet to experience Triple-A pitching, but he's already gotten plenty of attention from manager Kevin Cash, who recently compared his swing to a guy who may have the best-looking swing in recent decades, Ken Griffey Jr. Bauers has excellent plate discipline, some speed, and emerging power and could be up earlier than expected, though it seems unlikely he wins a spot on the Opening Day roster.

Alen Hanson (UT-PIT) - Hanson is a guy we've seen on plenty of prospect lists over the years, and he now appears poised to win a spot on the Opening Day roster, albeit as a utility player. Hanson had three hits on Friday to raise his slash line to a solid .379/.387/.483. He has struck out just twice in 29 at-bats, though he's also been caught on all three of his stolen base attempts. Hanson though has been good for 25-35 steals annually in the minors and could be a 15-homer guy at some point given regular at-bats. He's posted a sub-19% K% at every stop, though he's also walked at around a so-so 7% clip. Hanson has seen his prospect star dim a bit the last couple years, but it's possible he could work his way into enough playing time to have NL-only value on the strength of his legs.

Tim Beckham (SS-TB) - Beckham went 1-for-2 on Friday, raising his slash to a strong .333/.455/.667 this spring, including six XBH amongst his nine hits plus a 7:6 K:BB. Beckham continues to be a man without a set position, as Matt Duffy projects as the starting shortstop assuming he's ready for Opening Day after September heel surgery. If he's not, Beckham starts. If he is, Beckham sees time all over the diamond, including in left field where he's seen some time this spring. Beckham of course is a 27-year-old former #1 overall pick in danger of being labelled a bust (if he hasn't already), but he could be poised to surprise if given regular playing time.

Mike Zunino (C-SEA) - With catcher again being a scarce position, Zunino should be getting plenty of attention in drafts this year. He was 0-for-2 on Friday, but for the spring, the former top-5 pick is still batting a robust .348/.531/.957 with three HR and an 8:8 K:BB in 23 at-bats. Yes, the strikeouts continue to be a problem for a guy who has fanned in 32.4% of his 1,247 big league plate appearances, but the career .195 hitter is red hot and could be in line for a fantasy bump. Whether that means .220 or .250 in the batting average category remains to be seen, but 25 home runs is very doable.

Michael Brantley (OF-CLE) - I can certainly see folks making the case for avoiding Brantley like the plague, but I think he's a very viable bounce back candidate. Brantley will play in a minor league game Saturday to test out the shoulder and assuming that goes well, we could see a Cactus League appearance at some point next week. Brantley played in just 11 games last year, but remember, this is a guy who is still just 29 and who hit .310 and .327 the prior two seasons while flashing 20/20 ability. Right now he's sitting with an ADP in the 220 range, but a healthy Brantley is a top-20 outfielder. Take a flier if you can.

Keon Broxton (OF-MIL) - Broxton is dealing with a sore wrist at the moment, so while it appears minor, keep an eye on this progress over the weekend. Broxton was 1-for-2 Friday before leaving the game with the wrist soreness, but he's looking like a potential breakout candidate, batting .395/.489/.737 with three home runs and a pair of steals (4 CS). Broxton got the attention of fantasy owners last year when he hit .242/.354/.430 with nine home runs and 23 steals in just 207 at-bats. Project that out over 550 at-bats and if you own him, you're salivating. Realistically Broxton could land more in the 15 HR and 30 SB range, with batting average ultimately determining how valuable a commodity he is for owners. He did walk at a healthy 14.8% clip in 2016, but also fanned at an astronomical 36.1% clip. The solid OBP will keep him in the lineup, but if he can get that K% more in the 25% range, his upsid
e starts to look like a top-15 outfielder.

Alex Meyer (SP-LAA) - Meyer may have the edge over Jesse Chavez and others for the final spot in the Angels' rotation. The former Twins prospect allowed one run over three innings Friday. He still has a 4.70 ERA on the spring with a pretty ugly 5:7 K:BB in 7.2 innings, but Chavez hasn't been good either and he started in a minor league game Friday. Meyer is 27, so perhaps the Angels decide that it's "now or never" in terms of deciding whether he can remain a starter or if the bullpen is a better path for the former first-round pick. Bud Norris is another rotation option, but he's even 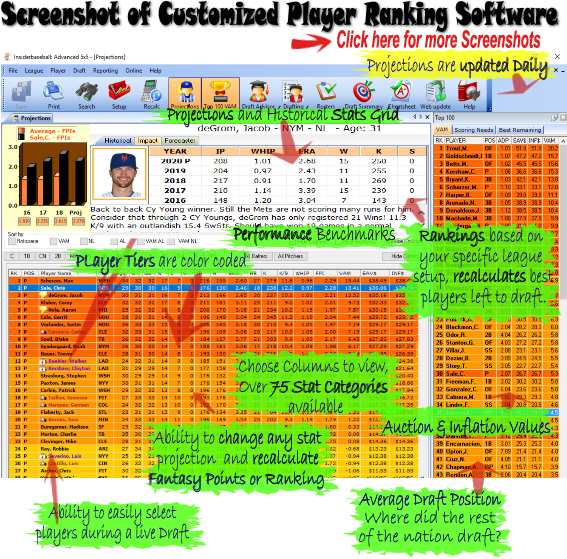