Several years ago we introduced Consistency Factor and it's implications to both Head to Head leagues as well as all Fantasy leagues regardless of their scoring setup. We run and update this piece every season because of it's veracity.  Consistency Factor gives us an indication of a batter's quality games or quality weekly output. The premise: established players who do not produce quality output on a consistent basis are a risk to achieve similar production in the future.

Essentially we want players who produce consistently rather than in sporadic episodes. The reasoning is a derivative of the laws of probability, consistency is paramount to lowering our risk...the more observations the better.  Below is a list of the worst hitters in terms of weekly consistency in 2012 (based on 375 ABs). The column below, Weekly 2012, is a recording of each player's 2012 quality weeks (out of a max possible 26 weekly observations). Also included is their 3 year average consistency percentage (2-3 Yr %) which is adjusted for playing time factors. 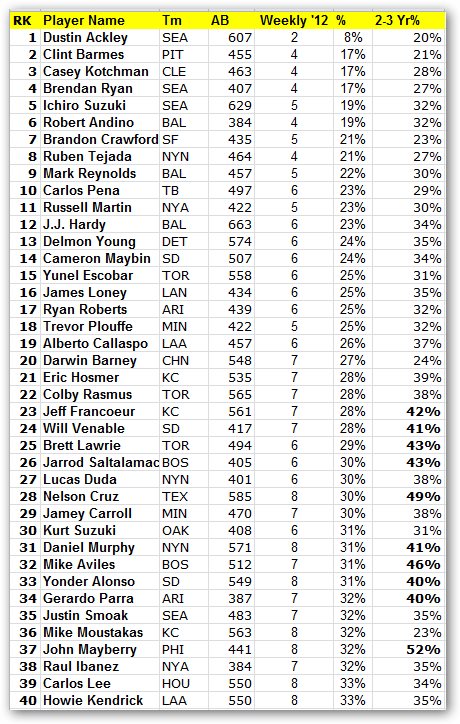 We know what to expect from Darwin Barney on a year to year basis: lack luster fantasy output. However there are players who have clearly begun to show the effects of age. Players like Ichiro Suzuki, Mark Reynolds, Russell Martin, Raul Ibanez, Carlos Lee are clearly showing the trend line associated with advancing age. You'll still see brilliance on certain days, possibly weeks at a time, but the time between these outbreaks gets longer with age. If you play in a weekly Head to Head league these are the type of players that you will need to avoid in your draft.

An example of some of the players we do expect to increase production this year, based on their youth and talent level include: Dustin Ackley, Eric Hosmer, Brett lawrie, Yonder Alonso, Mike Moustakas, John Mayberry.

When considering Consistency Factor  both injury and playing time risks are an additional factor to consider when evaluating players. As you thumb through the Consistency Factor indicator on the Player Pages within the windows software, you'll get a better feel on which players are a safer play for you on draft day....this is especially relevant if you play in weekly head to head league.

I do want to stress that 1st and 2nd year players should be given leeway, as they are just getting their feet wet and do have the potential to become consistent hitters.
Below is a listing of last season's most consistent players: 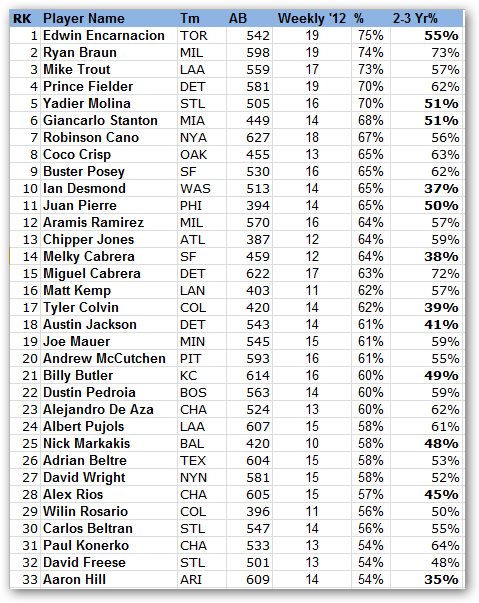 Edwin Encarnacion broke out in a pretty big way last season, but his jump in consistency from 55% to 75% raises a red flag, as it's a pretty significant jump...especially coming at the age of 30. Others that fall into the risk factor category include Yadier Molina, Giancarlo Stanton, Ian Desmond, Melky Cabrera (we know why), Austin Jackson, Billy Butler, Nick Markakis, Alex Rios, and Aaron Hill. Again the young players in this list should be given some leeway, but big jumps in consistency are often difficult to maintain. 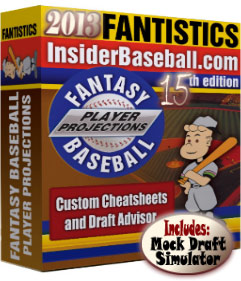 Here's some more Sabermetric analysis which helps define our preseason projections. These notes and other can be found in the notes section next to each of the players in the 2013 Player Projections Software. In no specific order, here we go:

P Brandon McCarthy Brandon's move to Chase field is going to be a difficult transition for a FB pitcher (38% GB rate in '12). Consider that his strength (sub par 8.1 HR/FB rate) is going to make it difficult for him to maintain an ERA under 3.50 in 2013. Consider that his SLG% outside of the coliseum was an un-wieldy .457 SLG. There'll likely be a honeymoon period, but then health becomes a concern.
P Brandon Morrow Posted an unsustainable 81% Strand Rate, lucky .248 BABIP. Don't buy into the 2.60 ERA/1.11 WHIP.
P Brett Anderson Positives include extreme 60% ground ball rate, Control rate 1.8 BB/9. Negatives include lucky BABIP in limited activity, pedestrian K/I (.71), lucky HR/FB rate, and health issues that have dogged him for 3 years. Will this be the year for Anderson?
P Brett Myers Heads back to starting rotation, but figures to be an average pitcher with a 1.30ish WHIP with 4+ ERA.
P Bronson Arroyo Arroyo pitched well last year, but we're starting to see a pattern of on and off seasons, which is typical for an aging pitcher.
P Bruce Chen Drop in Strand Rate (.67), expanded his ERA quite a bit in '12. 33 HRs last season were a career high, he's not fooling anyone at this point with a 88% contact rate. Dicey pitcher heading into last stage of career
P Bud Norris Tossed 10 Quality Starts in the 2nd half, but received no run support (2 Wins). Team support is not going to increase this season either.
P C.J. Wilson Production has been on a 4 year decline. Last season his RS% fell to .74 which bloated his ERA. Horrible 2H with 3 disaster starts hurt his overall numbers. Fundamental skills still in place for comeback.
P Carlos Villanueva His K/I rate kicked back up last season (.97), but his heavy fly ball rate 44% is going to continue to threaten his ERA and Win totals in Wrigley.
P CC Sabathia Despite posting a better WHIP last season (1.14), CC's average Fastball lost 1.5 MPH (92.3) last year and is no longer a + pitch. His other pitches are still reliable, but look for hitters to start looking for more of them moving forward.
P Chad Billingsley Ligament damage looms over his head as he starts the 2013 season.. Billingsley's production has been on a straight decline over the last 4 seasons. Part of the problem is his inability to average more than 6 innings per start.
P Chris Capuano 18 Quality Starts I n 2012, but there was a considerable drop-off in 2H (4.59 ERA/1.34) which could point to shoulder issues (as he's had problems with this in the past).
P Chris Sale All of his peripherals are in line, struggled slightly in the 2nd half but that's to be expected from a pitcher who increased his workload by 120 innings last season. The 17 wins from a season ago were inflated thanks to an outpouring of run support (deserved 13), so expect some regression there.