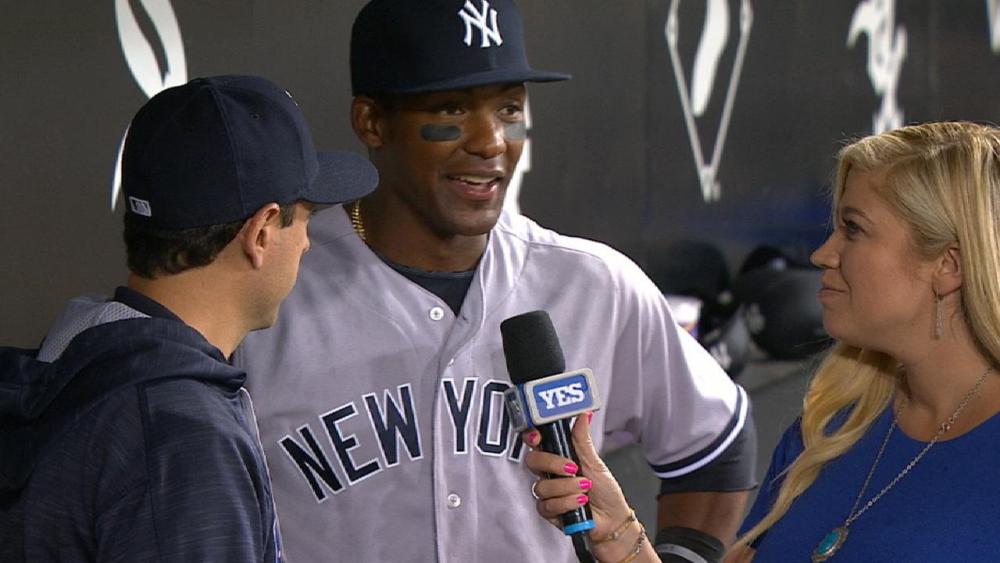 It has come to this in the Rockies outfield. After injuries to David Dahl, Gerardo Parra and most recently Carlos Gonzalez, 23-year-old Raimel Tapia is in line for some regular playing time, at least for a while. CarGo was placed on the DL June 26th, retroactive to June 23rd with a strain of his non-throwing shoulder. This is a situation which supposedly has been barking at Gonzalez for some time and it may have played a part in his .221/.300/.348 start and his .172 June, but it remains unclear how long his DL stay will be.

Raimel celebrated crossing the 100-MLB-career-at bat line with his first MLB HR on Friday night, but that's not his calling card as he has provided a double-digit HR total in only one season as a pro, in High-A in 2015. One look below and you'll see that what he brings to the party is speed.

That having been said Raimel has shown a solid hit tool and plate approach so far in the high minors and during his first 100 ABs in the majors. In fact, this year with spotty playing time Raimel has posted and excellent 8.5% SwStr%. That ability to make contact along with his plus speed allows him to post excellent BABIPs and collect opportunities to use his speed to steal bases and score runs.

Raimel's strong contact ability is also a bit of a double-edged sword in his game as it has allowed him to feel like he can chase 45.3% of the time so far in his MLB career, and that cuts his walk rate below where you'd like to see it. Still, there's progress there this year as his second tour of AAA has produced his highest walk rate since A-ball, and he's even improved on that in this tour in the majors so far, posting a 6.8% which is getting towards respectable, especially given his ability to make contact. He's also cut his chase rate from 47.6% in his first tour in the majors last year (38 ABs) to 44.1% this year. It's all moving in the right direction and regular playing time for a while may accelerate the pace of his gains.

The bottom line is that while a path for regular playing may not be clear at the moment, for Raimel, injuries have cleared a path to some regular playing time for the time being. That puts him in a position to pile up some SBs for you as well as some runs, and it's unlikely he'll hurt you in AVG. or OBP. In the short term, Raimel is a solid add if you need some speed. In the long term, he looks like a capable MLB lead-off type of guy, with good speed, especially if he continues to whittle down his strike zone as he has. But that's down the road. His currently value, however, has an expiration date. We just aren't sure yet when that date is.

Well, the Yankees roster has been pretty fluid lately, hasn't it? No more so than with Miguel Andujar who was called up to debut in Wednesday's game, and he did OK, going 3- for -4 with 4 RBI. He was then returned to Scranton to keep him playing regularly, only to be recalled after Dustin Fowler's gut wrenching season-ending injury.

Miguel showed some nice gains in his second AA tour this season with increases across his slash line including the nice ISO spike you see below. Where we didn't see gains, however, was in Miguel's walk rate and given his projection profile that's a bit concerning. He earned a promotion to AAA, however, right before his recall, and he showed more willingness to take a walk in his short stay there.

Miguel is a solid prospect with what projects to be a good hit tool. The time I saw him with Trenton I was impressed by his bat speed and his quick hands. His physicality caught my eye as well. He's listed a 6-0/175 and when I have seen him I'd say that weight might be a wet weight. This brings us to the crux of the matter with Miguel. We know he can make contact (sub-10% SwStr% over his 535 AA ABs over two tours). We know he can field the position well enough. We know he doesn't have much of any speed game ... What we don't know is what his power game looks like in terms of projection.

There are two factors at play here ... One is his physicality and what that can produce in raw power as he physically matures (he should be pretty much there) and builds on that maturity with professional training (who knows?). At 6-0/190 for example, if put on correctly, he should be able to produce more than representative raw power. That seems like a reasonable projected outcome.

The other is whether his hit tool will allow him to maximize his raw power as he converts it to game power. Right now he needs more lift in his swing. He tends to chop down in the ball right now. He also tends to pull the ball and that tendency has increased in the high minors. That may be an effort to suck some game power through the straw, so to speak. If so, that's the wrong approach as it tends to make him roll over on the ball. Miguel's hands are good, and he has such good bat speed he can wait and spray the ball, work on his physicality and the game power will come with a better physical base.

In the long term, his power ceiling is questionable but something approaching 20 HRs seems more standard these days and if all goes well there's no reason he can't be an upper 20s guy eventually. He'll hit for average, won't run, and he'll pop one here and there. If he acclimates to the majors quickly that will be enough to allow him to challenge Chase Headley for PT going forward. He'll have a chance to dig into the big league roster for a bit, and we'll see where it goes from there. I don't see him as a super high-ceiling proposition in either time frame right now, but if some trainer gets a hold of him and adds 15 pounds to him and his development coaches add some lift, I'm open to re-evaluating here. None of that seems to be pie in the sky, either.

Registered members can click on the following link to see the complete Prospect Central article for this week, which includes other prospects:http://www.fantistics.com/baseball00/M-Prospect.htm Click here for premium membership details:http://www.insiderbaseball.com/baseballsample.htm