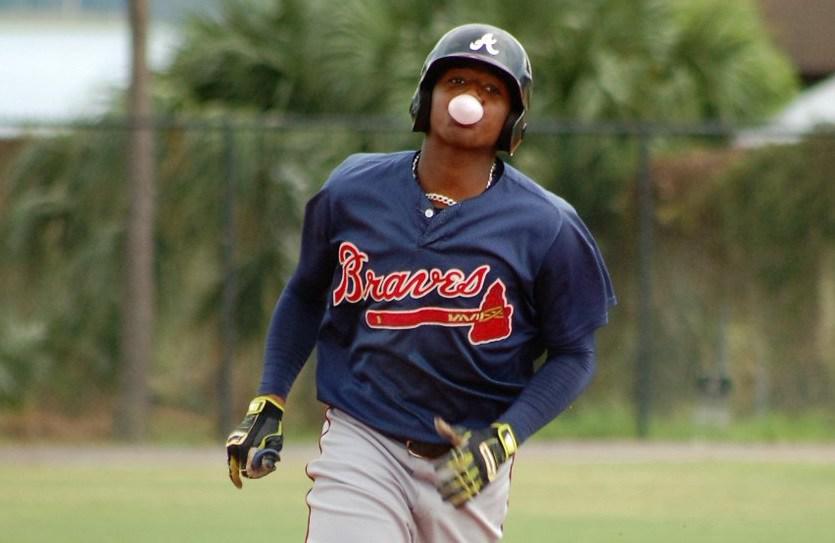 The Braves promoted outfield prospect Ronald Acuna to AAA Gwinnett on Thursday. He homered and went 3- for -5 in his AAA debut after putting a show in BP during the Futures game in Miami and after being named the Braves top prospect in the BA midseason Top 100.

"It's been exciting to watch Ronald grow as a player throughout this transcendent season," Braves general manager John Coppolella said. "We want to provide opportunities to our young players, and he's met every challenge."

Acuna has risen two levels this year starting in high-A after finding his way into more than a dozen spring training games in Florida. Chipper Jones comped him to Andrew Jones (and I assume he meant that as a compliment). The comp is a good one though especially for the young Andrew Jones. Acuna has plus-plus speed which makes him a plus defender and able to play all three positions. Offensively he has a raw speed game and a hit tool. There's a lot of swing and miss in his game, but he's young, he can take a walk, that swing and miss is coming way above his age curve, for the most part, and he's taming it already in just 226 ABs in the high minors (as of this writing), at, oh by the way 19 years old.

Very promising.
The Braves are excited.
I'm excited.
Get excited.

Did I mention he's just 19-years-old? He has the potential to be a 30 SB guy in the majors and with what we have seen in AA this year I don't see why he couldn't eventually chase the mid-20s in HRs as a major leaguer. Post a .300 BA on top of that, and we are looking at something surprisingly close to Mookie Betts. At 19, Mookie wasn't showing this kind of game power (.040 ISO) and he was playing in Lowell (short season A).

Friday's DFA of Pablo Sandoval had several implications for Rafael Devers, not the least of which was that it opened up playing time (along with the release of Jhonny Peralta) and a roster spot for Devers at AAA Pawtucket. Devers heads for where the calamari roam free sporting a .300/.369/.575 slash line at the age of 20. Devers came up in the press conference as well as writers asked about the Red Sox plan at third base for 2017.

"Our guys just feel with his age, where he is and what he's come through that it would be beneficial for him to go to Triple-A from a maturity perspective," Red Sox president of baseball operations Dave Dombrowski said of Devers. "Really, this year he's been tremendous, but we thought it might be beneficial for him to see Triple-A and be part of that and see how he adjusts to that."

Dombrowski isn't in a rush to bring Devers to the majors, and he still has a few bullets in the chamber on the major league roster with Jeff Rutledge and Brock Holt lurking as Devin Marrero and new addition Tzu-Wei Lin does a reasonable job, in composite, in the meantime. Reports on Saturday indicated the Sox were talking to the other Sox about Todd Frazier but I think that may be some bargain hunting on the Sox part. And even a Frazier acquisition wouldn't completely close the door on Devers for the year.

Rafael is clearly in the Red Sox long-terms plans. Dombrowski has not been shy or stingy about trading off shiny prospects and yet when the White Sox asked for Devers over Moncada in the Sale trade and were turned down.

I am not ruling out a 2017 contribution for Devers either however. What he has done on Portland this year is widely underrated. The emergence of his game power is unusual for his age, especially when you consider the ahead-of-the-age-curve level jump to AA. But his in-game power spike actually started in high-A last year. His first half in high-A last year produced a .233/.300/.335 slash line, which he upped in the second half to .326/.367/.539. Hello.

Devers has also installed his game power while polishing his hit tool. Ask him what he's learned at AA this year (as I did at the Eastern League All Star Game this week) and he'll tell you he's made his biggest gains in pitch selection and plate discipline. He'll also tell you that he doesn't like curve balls. This is where Dombrowski is checking off all the developmental boxes. Some experience in AAA makes sense for Devers, and right now is the time it makes sense to send him. This, in a way, is an MLB test run, which really isn't an MLB test run. Devers will see some more sophisticated pitching, more breaking stuff, better command, more game planning. We'll all see, at age 20, how he does with that, and that will in large part determine what happens going forward. If the Red Sox stay healthy among their SPs and continue to stretch out their lead in the AL East, and they continue to get reasonable production and defense out of the options they have on third. They'll be in no rush. But it just makes sense to show Devers enough time in the majors (assuming he handles AAA well) to be somewhat acclimated and ready for a stretch run and possibly the postseason.

Devers is beefy and muscular and frankly I am hoping the developmental staff keeps the reigns on his body type. He has terrific bat speed but doesn't have the most concise swing I have ever seen, but he's has tightened it up here in Portland. His solid (and improving) contact come from natural ability more than technique and some mechanics gains would help, but I am interested to see what AAA asks of him and how he responds.

The Red Sox need his pop. But they aren't going to look to him just yet. Still, I have a suspicion that he gets asked to the dance before rosters expand. I say we give it a month in AAA