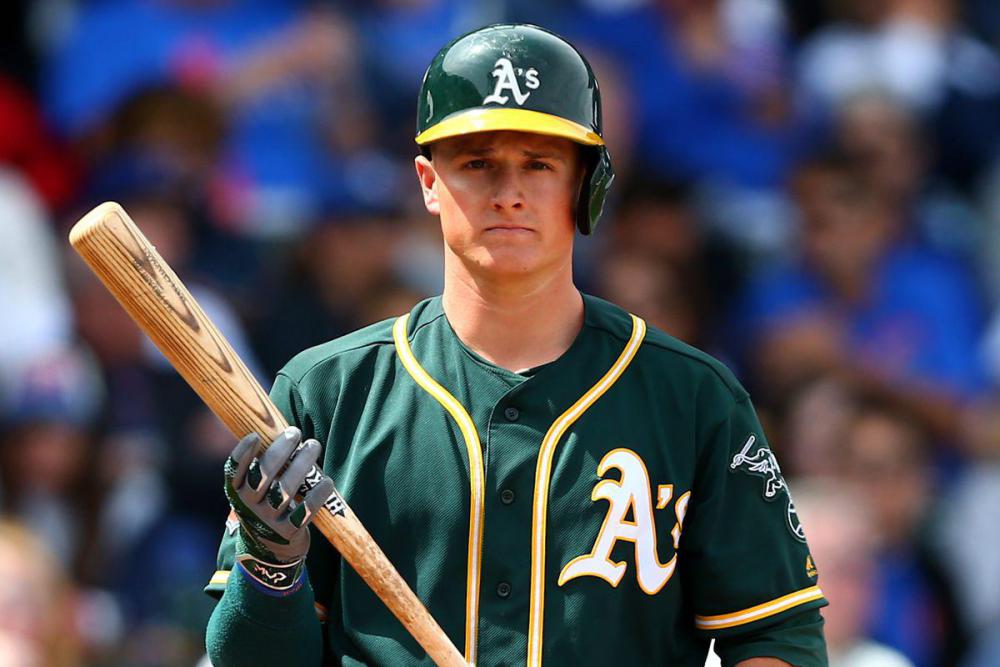 The Twins recalled Matt Chapman from AAA on Thursday after DFA'ing Trevor Plouffe to make room on the roster. Matt went 0- for 3 in his debut while hitting 7th. This is a super-two call up as the A's have estimated that the yet-to-be-determined S2 date has passed and they can now unleash Matt and preserve some service time protections. Chapman had a rough start to the season, including a sprained wrist that limited him to 25 ABs in April, in which he hit .120 Since then he's hit .272 in May and .304 so far in June with 16 HRs in 149 ABs. Overall, he leaves this AAA season, probably for the last time, hitting .259/.350/.592 with 16 HRs/5 SBs in 203 ABs.

Drafted in the first round of the 2014 Draft out of Fullerton, Matt shows plus raw power, much of which has already been converted to game power, as his 52 high-minors HRs in 690 ABs indicates. Additionally, Matt is a well-rounded player, strong defensively at third (possibly plus), with a good arm. And he runs well.

At the plate Matt is really simple to the ball in a good way but he's not always short to the ball. As a result he has a tendency to commit to breaking stuff early and there's a lot of swing and miss in his game as a result. I think that's somewhat fixable. Fortunately the game has come towards Matt's skill set and teams are more willing to ride with a 30% K rate than they have in the past, especially if the player involved will work a walk here and there (as Matt has in the minors) and he can be a defensive plus (which it appears that Matt will be).

I think Matt is here to stay and he should be a good source of power, probably well into the 20s with a full season, possibly a string of upper-20s seasons, and he'll chip in some SBs. He'll be a drain on your batting average but he might be somewhat/almost near-level in OBP. For 2017, given some of the injury issues we are dealing with, if you need some ABs with some pop, this might be the best add to your free agent pool until Moncada and Torres show up later this summer. It appears he has the ABs in front of him unless he hits his way out of the job. Think Jake Lamb.

As a response to Josh Reddick's concussion, the Astros seized the opportunity to take a look at Derek Fisher. He was recalled Wednesday after hitting .335/.401/.608 with 16 HRs and 13 SB in AAA Fresno. He homered and collected 2 hits in his debut.

It's been a winding road for Derek in the high-minors as this more classic power/speed combo type took a while to acclimate but things have clicked in AAA, especially this year. That's a pretty good 2017 line you are looking at right now. You can't ask for much more.

Derek's skills grade out even better in both power and speed, presenting a high ceiling in both aspects, but he's been raw as a baseball player to this point. This year's results so far, however, which the further cuts in his K rate and pull rate and SwStr%, all seem to indicate he might be starting to get some things.

Long term he's potentially a 20/20 type of guy, although I think the 20 SBs might be the least likely milestone. If he's becoming a baseball player, and installing a hit tool to go along with his skill set, Derek is an intriguing prospect going forward. For the rest of 2017 he'll see some ABs and get a taste of the majors while Reddick is on the mend. After that he'll fight for ABs with Nori Aoki in the "Stros OF. Potentially Derek could have problems acclimating in his first go around and we'll have to get some early returns to gauge what the Astros might do when Reddick is ready. Aoki (.279/.325/.343) isn't sexy, so unless Derek is overwhelmed, or other roster pressures present themselves, it's easy to imagine the Astros giving him a look and there could be some HRs and SBs in it for you. Still, Fisher appears to be a better long-term investment than short term, but he may surprise us.