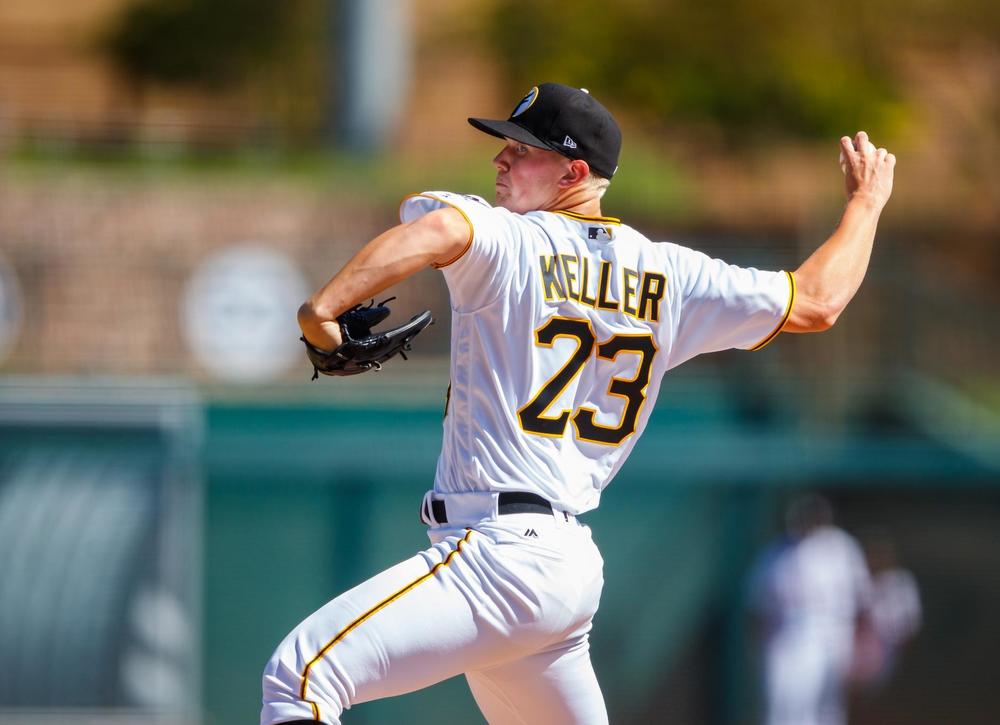 Mitch Keller has been the good kind of "ho-hum" in his second tour of AA this season, posting 14 solid starts as you can see below. In comparison to his 34.2 IP at the level last year, a couple of things stand out. His LOB% flipped from headwinds in 2017 to a tailwind this year, probably accounting for much of the difference in his ERA. He has seen some tailwinds from his BABIP as well. There's nothing there to undermine his performance level however, simply an observation.

Now look at his plate rates. He's walking more hitters than we'd expect, although not at an alarming rate. But his K rate has slipped quite a bit. His current rate is not completely out of character as his K rate looks very similar to his 2017 line in high-A. While you are there, take a look at what else is very similar to that line, his GB rate.

Mitch was promoted to AAA on Wednesday after a strong final start at AA where threw 8 shutout, one-hit innings. He turned 22 almost three months ago and the 6-3/195 righty was the Pirates 2nd pick, 64th overall in 2014. Mitch throws a mid-90s FB with some life. A few years ago we'd have called his velo sneaky, and he can beat hitters with it. He's bringing along a change, but his calling card is his outstanding and potentially double-plus curveball. The Pirates want to frame that curve with his FB/change combo and they have been cultivating both his ability to locate that fastball here in the Eastern League and his arm action on the change. That's been the emphasis for this season so far. Mitch was solid on both counts anyway, but the AA Bucs have been wringing out every last gain they can in that regard. This week's promotion indicates they want to see what they have assembled here and how those gains will play in AAA. Perhaps if they take off the developmental leash when he arrives at AAA, his K rate will rise a bit. That's something to watch.

He threw 116 IP last year, and I am estimating that you could see something around 140-150 IP from Mitch this year, so there could be some innings left for September. It's going to fun to see where his K rates land and how much he was reigned in while in AA. The Bucs may like what they see in AAA and could be preparing him for post-trade-deadline work with the big club, but I still favor a September timeline. If he returns to the mid-20s in K rate, Mitch is a top-half-of-the-rotation starter. That's what I am betting on. Additionally if we are talking about a small-market #2, I think that's a highly-realistic projection and one you can make with an unusual amount of confidence for a pitching prospect. I don't see much 2018 value here, but in keeper leagues with any reserve depth or a minor league component, he's a must-have as a quality starting pitching prospect.

Every once in a while I talk about checking back in on a prospect when I write about him early in the season. I talked about Alex Verdugo after he spend some time with the Dodgers earlier in the year and that didn't end well, with him going 1- for his last -13 before being sent back down. Here's what I wrote about him at that point...

Overall he's making up some ground on repeating his AAA first tour with the near-level BB% and K% you see below and his .314 BA, but in one respect, power, he's showing some gains this year, posting a .197 ISO vs. his .122 ISO in '17. I think we are looking at an approach change here and the struggles associated with it. Alex is just getting more aggressive in an attempt to make himself more promotable. That's fine, he has a good enough hit tool that he can attempt to trade some contact for power. And if he only hits .270-something but chins his ISO over .200, I think he's more useful.

Scouting reports also say that he has the game power to tap into and at 6-0/205, he may be able to add some physicality as well. Reports also indicate Alex has some challenges in makeup but we really should see him start to turn the page on those and begin the process of converting raw power to game power this summer. He needs 2-3 months in AAA and we'll know a lot more about his projections by the trade deadline.

Right now he's a good prospect and perhaps a better baseball prospect than fantasy prospect. I see him as a good player, but without a very high ceiling in power and he has no speed game. Eventually, he'll be useable once he finds everyday ABs in the majors, but as a 4th or 5th fantasy OF with little fantasy "wow factor"

Alex had hit 4 HR in 76 ABs to that point in AAA and sits at 6 HRs in 210 ABs as I write this. He has raised his ISO from his first tour (.122) to .157 but that's not enough to raise my interest in him. There's a lot to like here if you are a baseball scout. Alex is athletic and has a good approach, but from a fantasy standpoint, I am a bit worried about his power ceiling. He is 6-0/205 and he really should be able to provide the standard-issue 20 HRs in the majors but while I recognize he's just 22 years old, I think that ability is at least suspect at this point. We'll see, but at a minimum, I think it scuttles his 2018 prospects and, without much of a speed game, it calls his long term fantasy value into question. I stand by my original 2018 grade until he changes my mind.

The first indicator of what the Twins think on Lewis Thorpe was that they added him to their 40-man last winter to keep him out of the Rule 5 Draft. Sure, the 22-year-old had a good season in High-A, which a 22-year-old should have, but that was a return season for Lewis after a long recovery from TJS. Neither his K rates nor his control was particularly impressive and frankly a rather fortuitous 3.8% HR/FB% in a year when his GB rate was just 36% dressed up his ERA a bit.

This year his plate rates are rounding back into form and his GB% is reaching towards 40%. Still, at AA he's giving up some HRs and that's cut into his LOB% and inflated his 4.06 ERA from his 3.24 xFIP. Once Lewis starts to throw more ground balls, all of that should stabilize.

The silver lining to TJS is that a lot of focus is placed on the pitcher's mechanics as he returns. This may help clear up some of the control issues Lewis struggled with, and in fact, we've seen some evidence of that already. Good mechanics promote repeatability. That usually shows itself in command and location, and the ability for Lewis to hide the delta between his FB and change, both of which may be plus pitches already. Attention to, and awareness of, their mechanics also makes it easier for pitchers to install upgrades, in Lewis's case that could be needed upgrades to his curve which shows some promise, but lacks bite and consistency.

The takeaway here is that the Australian is back on the prospect radar and he has some ceiling. Lewis' fastball/change pairing has some swing and miss in it, and if he can bring his curve along things will start to get interesting. I give him the ceiling of a #3 starter with slightly above average punch-out ability and I think he's got a shot to reach that ceiling. He threw just 83 IP last year and he's at 75.1 IP already this year, so I think it's an upset if the Twins are planning any MLB IP for him in 2018, and I am not even certain he's a contender in camp next spring, but I think he will be a factor. Let's see where he is 10 starts from now.