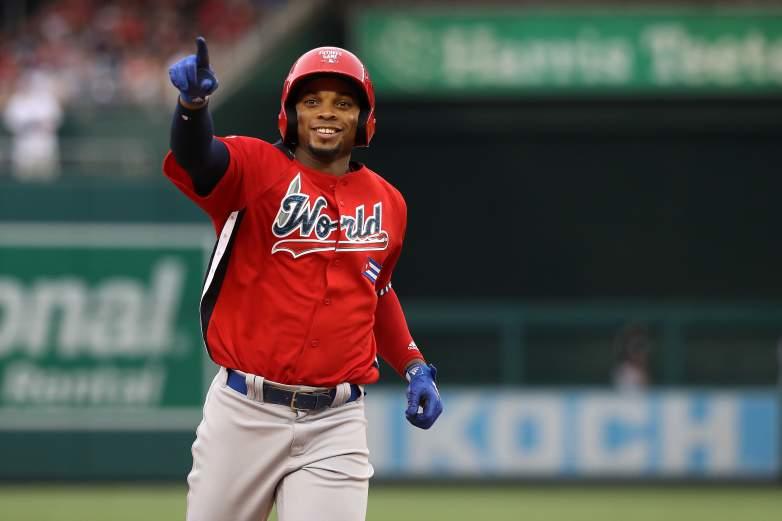 Francisco Mejia was dealt by the Indians to the Padres in exchange for a couple of relievers, Brad Hand and Adam Cimber. I profiled Francisco this year just before the June draft ...

Catchers as prospects put you in same position that you find yourself in during spring training with pitchers, where you see the results, but what you don't know is what the player is working on as he produces those results. He could be working on something else entirely. In this case is Mejia working on his defense? Scheming? Who knows? What we do know is that his offense hasn't been good in his first tour of AAA this spring. I am prepared to write that off, however, except for the erosion of his contact skills as shown by his career-high 23.2% K rate and a 5% hike in his SwStr%. As I said, I'll write that off, for now, but I'll duly note it.

Franciso's offense isn't really worrisome. I think he's going to hit, and hit with some pop, but his offense projections only really plays well with a catching qualification. Otherwise, his offense is less-than-compelling. So his defense is a factor here, especially from a fantasy standpoint because I am not sure he can pull his weight there defensively. I am not sure he's going to stick behind the plate. I am also concerned about his physicality and whether that will stand up to a full-time catching gig. Additionally, at 5-10, I am not sure he has a second position to fall back on. He's not going to 1B. I don't think he has the chops for 3B and the Indians are in pretty good shape there. And his bat may not play at DH, at least not full time...

... If you are telling me he can be the Indians starting catcher for the next three years, I am in, and I think that makes him valuable fantasy property. But I don't think you can tell me that right now, nor can you answer the question that unknown begs: "If not, then what?"

Lots of talent. Lots of risk.

I gave him a B - - at the time. This deal strikes a couple of cords for me. One is that the Indians gave him up without much reluctance. The other is that while I questioned the "what-if" possibilities of what happens if Francisco can't stick at catcher, he gets dealt to the NL, which eliminates a DH possibility. Clearly, the Padres are committed to Francisco as a catcher and that places him on the same path as Austin Hedges who is a solid defensive catcher, who has offensive capability but is under-performing at the plate.

The bottom line here is that the deal ups Mejia's stock. Despite where he is developmentally, and his torrid June, opportunity wasn't knocking in Cleveland any time soon. The Padres, however, really have little reason to wait before taking a look at him in the majors. They obviously feel his defense is passable because they seem to be fairly screwed if it isn't. His new ballpark mitigates some of this enthusiasm, however, because he doesn't seem to present enough power to just shrug off spending a lot of time in San Diego, LA, SF, and now Arizona (but then Coors gets added to his schedule of course).

We'll see how this all plays out, but I think the takeaways are that Francisco is now solidly a catching prospect and should remain one, and he's a lot closer to his shot at the big leagues than he was a week ago.

Feel free to stash him.

Yusneil Diaz was the keynote prospect in the Orioles trade for Manny Machado during the ASB. The Orioles also got INF Rylan Bannon, pitchers Dean Kremer and Zach Pop, and INF Breyvic Valeria. To be brief about the secondary prospects, Kremer and Pop look like organizational depth at this point, Valeria is 26 and a switch hitter with a good hit tool but no real power. He is rosterable in the majors, especially for the O's, as a utility player. Bannon plays middle infield and he's shown some pop at High-A in the California league, but I am not sure that pop will play in the high minors. First, he's small, and while he zones up pretty well, contact can be problematic. We'll check back on him a year from now.

Diaz is a Cuban signing from 2015 ($15.5M). The 21-year-old RHH is having a ball in AA this year as you can see below and I still think there are a lot of quick and dirty developmental gains to be had here. He's 21, but he didn't join the Dodgers as a polished prospect. He's been a project prospect, not in terms of raw skills, but in terms of quality development and craftsmanship. And the project is going well.

I love his bat speed and how the ball jumps off his bat. He's 6-1/195 and so you are probably going to be disappointed by his current .477 SLG%, but don't focus on that right now. Look at how in his second tour of AA Diaz not only has leveled his BB and K rates, he actually has walked more than he has fanned this year. His contact quality is good as well. His LD% in 108 AA ABs last year was 32% and this year in 220 ABs it stands at 23.5%. His hit tool is coming quickly, and I imagine that is the result of a lot of focus on making contact. That has paid off and the power will follow. Right now he is contact and zone focused.

Eventually, he develops 20+ power, which I know isn't saying much because that is pretty much standard issue these days. You have every right to question his power ceiling and I don't think there's a 30-HR season in there either, but he's so athletic, he has such great bat speed, his hit tool is getting compelling, and it's so early in his project developmentally, that I can't rule it out, especially in the AL East.

Diaz is an athlete learning the game. His gains show that he's taking the instruction and applying it and I think the O's got a very nice prospect here. I also think he needs the rest of the year in AA and some time in AAA, although if the O's choose to get him to AAA this summer, I don't think that's a bad thing.

He's an excellent prospect. He's not a factor in 2018, I do not believe, and I don't believe he's a threat to break camp with the O's next spring either. But I reserve the right to change my mind.