Expected ERA winners and Losers from a season ago

Expected ERA winners and Losers from a season ago

Expected ERA (XERA) depicts a pitcher's "True ERA" based on the factors within a pitcher's control. These factors include Hits, Walks, Home Runs allowed and K's. When one considers the inequity with the ERA calculation, specifically related to defense and base runners inherited/left, many including myself consider XERA to be a more precise gauge of ability.

The best way to use XERA is to compare it to the actual ERA. Using the delta between the two indicators we can make observations as to whether the pitcher's ERA was a true gauge of his ability for the given period. For example, in 2011 Gavin Floyd posted a 4.37 ERA, yet his expected ERA was .88 points lower. A rebound in 2012 is likely. 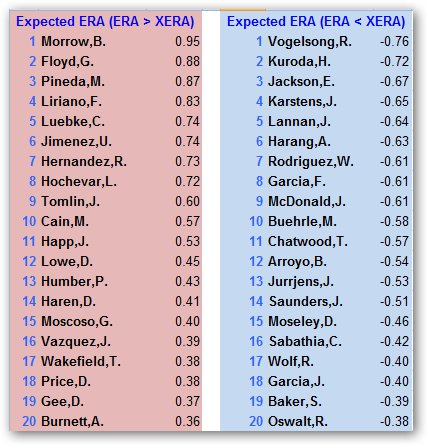 Tweets by Fantistics
NL Player Notes - September 27th
Fantasy Baseball: Is a Stolen Base more valuable than a Home Run?